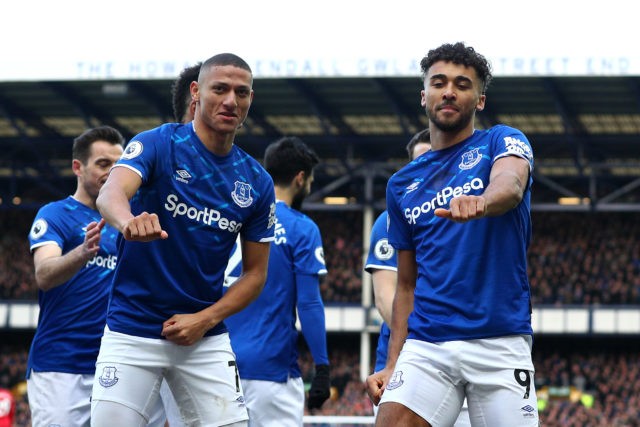 Everton striker Dominic Calvert-Lewin has been linked with a move away from the Merseyside club and it appears that Premier League giants Arsenal are keeping tabs on the England international.

According to the Mirror, the Gunners are looking for a long term replacement for French international striker Alexandre Lacazette next summer and Calvert-Lewin has been identified as a replacement.

Lacazette is nearing the end of his contract at Arsenal and he is expected to move on at the end of this season.

The 24-year-old has been outstanding for the Toffees and he managed to score 21 goals across all competitions for them last season. Calvert-Lewin’s season has been hampered by injuries this year and he has three goals to his name in three Premier League appearances.

The Everton striker has the potential to succeed at a top club and a move to Arsenal could be the ideal step up in his career right now.

The Merseyside outfit are going through a tough period right now and they are unlikely to challenge for the major honours anytime soon. A move to Arsenal could help Calvert-Lewin realise his ambitions.

It remains to be seen whether the Gunners come forward with a concrete approach for him in the coming months. The report from Mirror adds that Arsenal are ready to test Everton’s resolve with an offer for the England striker.

Calvert-Lewin has a contract with Everton until the summer of 2025 and the Premier League side are likely to demand a premium for his services.

Arsenal will be hoping to get back into the Champions League as soon as possible and having a top-class target man like Calvert-Lewin could improve them immensely in the final third.

Mikel Arteta has quality creative players like Emile Smith Rowe, Martin Odegaard and Bukayo Saka at his disposal and Calvert Lewin would benefit from their service.

Furthermore, the Everton striker is more than just a goal scorer and his hold up play and aerial ability will add a new dimension to Arsenal’s attack. The 24-year-old is adept at bringing others into play and the likes of Nicolas Pepe and Pierre-Emerick Aubameyang are likely to benefit from playing alongside him.