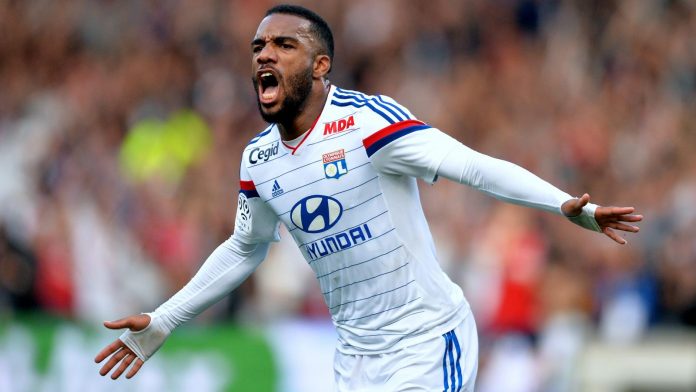 Arsenal are on the verge of completing transfer deal to sign French centre forward Alexandre Lacazette from Lyon, the Sky Sports report.

The Gunners have had their initial bid rejected by the Ligue 1 side but according to recent reports in England, Arsenal have told Lyon that they are willing to pay £45 million plus add-ons to secure the services of Lacazette this summer.

The 26-year-old remains a long-term transfer target for Arsenal, who are determined to bolster their squad after failing to qualify for next season’s Champions League football.

Sky Sources: Arsenal have told Lyon they are willing to pay £45m plus add-ons for striker Alexandre Lacazette.

Lacazette scored an impressive total of 37 goals from 45 appearances for Lyon last season and was continued to be monitored by several clubs across Europe. The France International reportedly had a verbal agreement to join Atletico Madrid this summer, but the Spanish giants were handed transfer ban earlier this month that will prevent them from signing any player until the January transfer window.

Lyon president Jean-Michel Aulas had previously revealed his club’s desire to sign Arsenal striker Olivier Giroud but he has now claimed that player exchange deal involving Lacazette and Giroud was never discussed with the Gunners.

Aulas said: “At this moment, we have not reached an agreement with Arsenal for Alexandre Lacazette.

“Also, an exchange deal between Lacazette and Olivier Giroud has never been spoken about.”

Lyon, meanwhile, have completed the signing of Mariano Diaz from Real Madrid for €8 million who could potentially replace Lacazette following the highly-sought striker’s proposed move to Arsenal in the coming weeks.