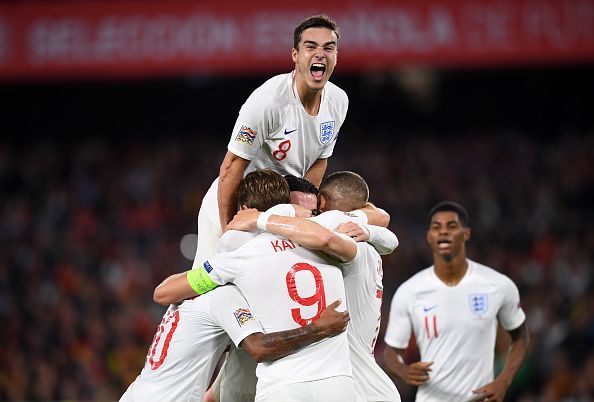 In a pivotal UEFA National League game, which England had to win to stand any chance of progressing to the semi finals, they looked terrific, especially in the first half, as they beat Spain 3-2 at the Estadio Benito Villamarin in Seville, the home of Real Betis.

England flew out of the blocks and stunned Spain with their aggressive, counter pressing style, culminating in three excellently worked goals inside the first 40 minutes. The highlight being Raheem Sterling’s second goal of the evening, which was a simple tap in after a wonderful chipped pass from Ross Barkley to Harry Kane who duly found Sterling in acres of space five yards from goal.

Spain rallied in the second half, with Paco Alcacer scoring a wonderful header from a corner, after poor England marking left him free inside the box. Sergio Ramos grabbed Spain’s second goal in the 97th minute, but there wasn’t enough time for another Spain attack so the game ended 3-2 to England. This England victory ended Spain’s remarkable 37 game unbeaten home run in competitive fixtures stretching back to 2003 when they slumped to a 1-0 defeat to Greece.

So what did we learn from England’s landmark victory?

Sterling had struggled to replicate his Manchester City form for England. Before this match he had only scored two goals in 45 appearances, with the last goal coming around three years ago. Howeve he dazzled against an admittedly porous Spanish defence. He ran Marcos Alonso ragged in the the first half, slaloming past him at high speed time and again like Lewis Hamilton in his Mercedes going round corners at the Monaco Grand Prix. It was a sight to behold.

Sterling’s first goal came after an excellent pass from Marcus Rashford who put him through on goal. When the ball arrived he took a touch and dispatched his shot into the top corner with such speed, it left David De Gea hopelessly stationed in the middle of his goal. He didn’t just admire that goal he was hungry for more. So there was no surprise when he scored his second shortly before half time. It was from five yards out after coming in from the right wing to a central position, something he does regularly in a Manchester City shirt since Pep Guardiola’s arrival as Manchester City manager back in 2016.

On the evidence of this game, Sterling should be considered England’s most important player. He can beat defenders with ease, take up clever positions between full backs and centre backs, pop up in the box unmarked and finish emphatically when given a clear sight of goal.

If England can get this sort of tune out of Sterling more often maybe winning Euro 2020 doesn’t seem so far-fetched after all.

Spain’s post World Cup form heading into this fixture was great with three wins out of three. The 6-1 win over Croatia was particularly impressive and started the ‘Spain’s the best team in the world’ hype train. Despite such claims it was clear this result was an anomaly because this isn’t a vintage Spain side no matter what some pundits and journalists have you believe. Just look at their line up. They had Jonny Castro, Marcos Alonso, Iago Aspas, Nacho and Rodrigo, all starting. Lets be honest none of these players are top quality, nor would they get into France, Belgium or Brazil’s third strongest sides let alone their starting elevens. Therefore there was no surprise when they were overrun in the first half by a dynamic and creative England team.

On top of that the two most iconic players, in Spain’s starting lineup; Sergio Ramos and Sergio Busquets were awful. Both of them were major liabilities during the game, constantly making mistakes and giving the ball away. It was clear in this match, they are well past their best. To be honest there is an argument to be had that they have been well past their best for at least the last two years, maybe longer.

So hopefully this result puts into perspective where Spain are at, currently. They are a decent side who can compete against the likes of England and Croatia, but they are simply no match for the best international teams. If they were to get through from their UEFA Nations League group; a massacre not seen since the St Valentines Day Massacre orchestrated by Al Capone in 1929, at the hands of Belgium or France would be incoming.

3. Joe Gomez can be England’s leading defender for the next 10 years

Gomez demonstrated why Liverpool fans have been constantly tweeting about his talent for a while now. Admittedly doubts do arise when a fan base continually praise their own, but tonight it was clear why. He won everything in the air which came his way. Alongside Harry Maguire, he bullied Rodrigo and Aspas who were non-existent throughout their time on the pitch. He also showed great composure on the ball, finding teammates regularly and only pumping the ball long when absolutely necessary.

This performance by Gomez could be career defining, due to the reputation of the opposition and the hostility and atmosphere inside the ground. It showed he can cope comfortably in a big away game and is still only 21 years old. Not that you would have known it watching him play.

Based on this showing Gomez has the capabilities of being England’s leading centre back for the next decade at least.