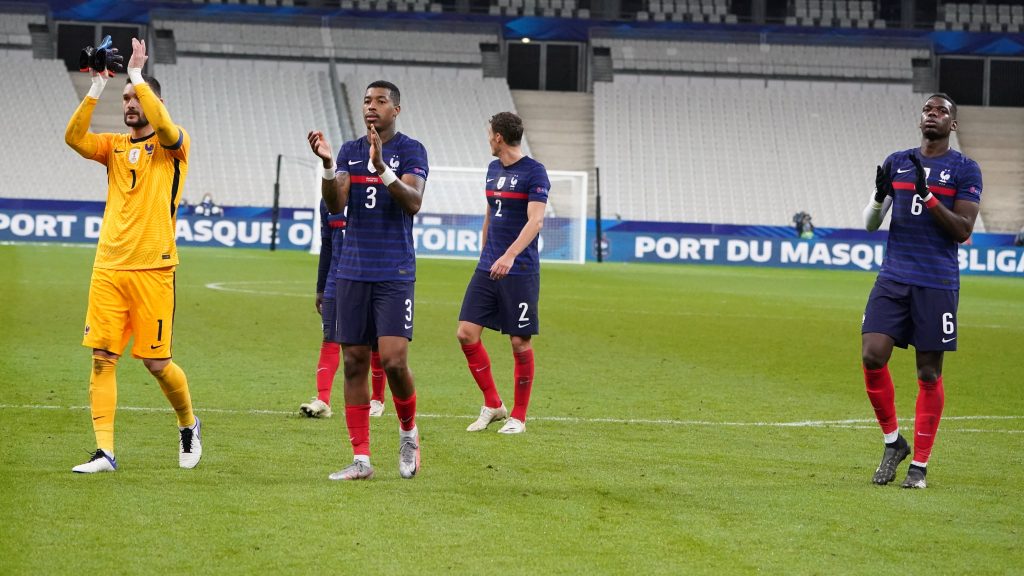 With football across the globe at a halt due to the international break, the UEFA Nations League will take centre stage in Europe as matchday five starts this weekend.

There are a host of fixtures being played on Saturday and Sunday, and you can live stream all Nations League games using the sites here.

It will be a rematch of the Euro 2016 Final when Portugal host France, but it’s still unknown if Cristiano Ronaldo will be back for his huge clash after picking up an ankle injury with Juventus last weekend.

Elsewhere, Germany will be looking for a much-needed victory after drawing three of their first four matches when they face Ukraine. Also in Group 4A, Switzerland host Spain.

On Sunday, Poland will look to stay top of their group when they play Italy on Sunday, while Belgium go head-to-head with England.

Currently both tied at the top of their group with 10 points apiece, this match will prove to be extremely important.

The Portuguese won this competition in its inaugural year back in 2019, beating the Netherlands in the final. However, in order to advance to the Nations League play-offs, they’ll need to win this group.

Matchday three of the Nations League saw Portugal and France play to a scoreless draw but, other than that, they’ve both won all their games thus far.

Fernando Santos’ squad has looked solid thus far, beating Sweden (twice) and Croatia. Liverpool star Diogo Jota already has three goals in the competition and has hit his best form for his club, so it will be exciting to see what he’s able to do with his country against France.

The defending World Cup champions will be also be seeking a crucial three points. Borussia Monchengladbach striker Marcus Thuram has received his first call-up to the national team and should add some attacking firepower for Les Bleus.

Here's our 26-man squad for the upcoming games against Finland 🇫🇮, Portugal 🇵🇹 and Sweden 🇸🇪, with a first call-up for Marcus Thuram! See you Monday boys 😍!#FiersdetreBleus pic.twitter.com/Um2HB4mWuJ

Didier Deschamps’ men have won three of their last five appearances against Portugal, with the lone defeat coming in the Euro 2016 Final. However, they’re currently on an 11-match unbeaten competitive run.

With both sides having very strong backlines, this should be a close fixture with very few goals being scored.

Germany face an uphill battle in order to win a group that also consists of Spain, but a victory against Ukraine this weekend will take them one step closer to finishing at the top.

Joachim Low’s side have been disappointing to this point, drawing three times and winning just once. That solitary victory came against the Ukrainians on matchday three, beating them 2-1 in Kiev.

Timo Werner has been in top form with Chelsea and he will be eager to continue to score goals on international duty after netting twice in his first four Nations League appearances.

The Germans are currently level on six points with Ukraine, so three points will be crucial in Leipzig for the home side.

Andriy Shevchenko’s men have landed in a very tough group, but they’ve held their own. Ukraine impressed in Euro qualifying, advancing to next summer’s tournament while finishing above Portugal in their respective group after going undefeated in eight matches.

Last time out against the Germans, they were lucky to lose by just one goal after being outplayed with just 27 percent of the possession.

Ukraine will be hoping for a different result this time around, but with Germany hungry to finish above Spain, it’s definitely going to be a very tough clash.

Switzerland are currently bottom of Group A4, after picking up just one point in their four outings to date.

A defeat against Spain would see the Swiss relegated to League B. However, Vladimir Petkovic’s side are unbeaten in their last 17 appearances on home soil, which is certainly a positive sign heading into a very difficult fixture. Last time out, they took away a point in a 3-3 draw with the Germans.

Against a possession-heavy team like Spain, they’ll likely be running after the visitors for the majority of this match but, with an impressive record at home, Switzerland will be feeling confident. With relegation on the line, there’s certainly a lot to play for here.

Spain suffered a shock 1-0 defeat to Ukraine on matchday four, which gave Germany the opportunity to creep an inch closer to them in this group.

In true Spanish fashion, they dominated the ball with more than 700 passes in this match, but finishing was an issue as they weren’t able to find the back of the net.

Thanks to that dismal result, Luis Enrique’s side will be coming out firing against Switzerland as they look to grab three points before their final clash against Germany next week.

Due to Ansu Fati’s knee injury with Barcelona last weekend, Wolverhampton Wanderers star Adama Traore should feature in the starting XI for Spain.

Alvaro Morata has reinvented himself since joining Juventus prior to the season and will definitely be an important part of Enrique’s attack in their final two games.

With just a point separating these two teams, this should be an exciting fixture. Italy played some thrilling football last time out in a 1-1 draw against the Netherlands, who are also in the running in Group A1.

The Italians were creating boatloads of opportunities in the final third and should once again be a threat against a weaker Poland side, who have managed to grab seven points.

The Italians are still unbeaten in this group, but they’ve drawn three times and won just once. They’ve yet to win on home soil as well, tying both matches in Italy by 1-1 scorelines.

Goals have been far and few between for Roberto Mancini’s side, scoring just three times in four matches. It’s safe to say they will need a convincing victory this weekend.

Poland have done quite well to this point, going 2-1-1. Robert Lewandowski’s double against Bosnia on Matchday four sealed a 3-0 victory for the Poles, but their next two fixtures will test them as they take on Italy then the Dutch.

Lewandowski has scored just twice so far but his clinical ability in front of goal will surely be needed if Poland are to finish at the top of this group.

With such tough opponents ahead, they will need to be at their absolute best. Both of their previous clashes with their Group A1 counterparts were close, as Poland have conceded just twice to this point.

They played to a scoreless draw against the Italians last month and will need a similar result at the very least this weekend.

The Red Devils could secure qualification from Group A2 if they beat England this weekend in Brussels.

Belgium will be looking for revenge after they lost 2-1 to the Three Lions on matchday three at Wembley. If Roberto Martinez’s side can beat England and Denmark drop points to Iceland, they will secure an unassailable lead.

With a vibrant attack consisting of many top-notch strikers like Dries Mertens and Romelu Lukaku, the Belgians have scored ten goals in four matches, which is the most of any side in the Nations League.

The Inter Milan star has three goals to his name, while Mertens and Michy Batshuayi have both netted two goals. Belgium have won ten straight on home turf while scoring an impressive 46 goals along the way.

England are currently tied with seven points alongside Denmark in second spot, but their goal difference is poor. Gareth Southgate’s men have scored just three goals and conceded twice.

Harry Maguire’s early red card against Denmark on matchday four led to a disappointing 1-0 defeat after Christian Eriksen converted a spot-kick in the first half.

A positive result is very much needed against Belgium if they want any chance of advancing to the Finals next autumn.

Congratulations to @BellinghamJude, who has been called up to the #ThreeLions for the first time! 👏 pic.twitter.com/bWpDevg4ae

17-year old Borussia Dortmund phenom Jude Bellingham has received his first call-up to the senior team and will be part of the squad that will travel to Brussels.

However, Liverpool defender Trent Alexander-Arnold will be absent after hurting his calf over the weekend against Manchester City.

This should also be a close match but, given Belgium’s perfect form at home, they look to have a slight advantage.