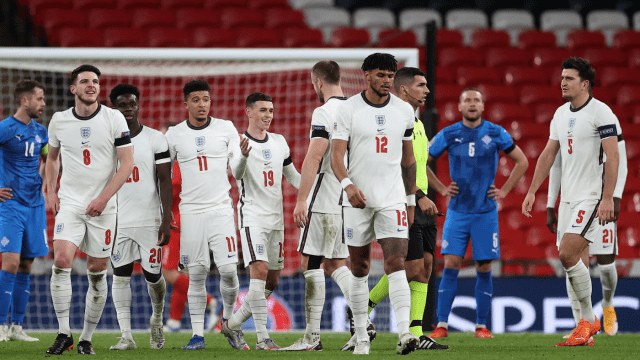 The UEFA Nations League group stage came to a close on Wednesday, with Italy, Belgium, France and Spain all progressing to the knockouts.

England failed to meet the standards they set in the inaugural Nations League, finishing third this time around behind Belgium and Denmark. The performance of the Three Lions has left a bitter taste in the mouths of many of the watching spectators, who believe that they’re vastly underperforming.

But was it all that bad? Let’s take a look.

A dominant performance from the #ThreeLions, who end the year with a comfortable win 👏 pic.twitter.com/DOEjC07sWN

It may have come when there was nothing to play for, but the Three Lions bowed out with an emphatic display against Iceland.

Unfortunately, it was just too little too late.

After grinding out a 2-1 win at home to Belgium, Gareth Southgate’s side had the opportunity to extend their lead at the top when they faced Denmark at Wembley.

Instead, they put in a miserable performance. Harry Maguire’s brainless challenge saw him receive a second yellow card early on, and then a mix up between Jordan Pickford and Kyle Walker allowed the visitors the chance to take the lead from the penalty spot, which Christian Eriksen duly took.

Messy at the back, weak in midfield, anonymous up front – it was an all-round disaster in October.

One of the biggest concerns for the Three Lions is the defence. While there are several top-class English players in attack, there is a distinct lack of quality in the backline.

However, aside from a few daft individual moments, England have looked mostly solid and difficult to break down.

Southgate will be hoping that this can continue into next summer’s European Championships.

There was a price to pay for the defensive solidity and a pretty hefty one.

While looking better at the back, England looked bereft of ideas upfront. Excluding the dead rubber against Iceland, Southgate’s men registered just three goals, with two of them coming from the penalty spot. For a team with as much attacking talent as England, that is frankly inexcusable.

The Three Lions have proven before that they can pose a threat going forward, scoring the second-most goals in Euro 2020 qualifying. So to see such a weak showing in attack is very disappointing.

While his 3-4-3 formation provided some protection at the back, it completely stifled any attacking threat the team had, leading to several impotent and uninspiring displays.

Anyone who wasn’t sold on Southgate before certainly isn’t now, anyone who was on the fence about him is now against him, and any of his supporters are starting to question whether he’s the right man.

The 50-year-old has a massive challenge trying to get the fans back on his side before Euro 2020.

Finishing behind Belgium is no surprise. After all, they possess arguably the best midfielder in the world in Kevin De Bruyne and several other top-class players. There’s no shame in that.

However, to end up behind Denmark as well is a huge disappointment. The Danes are no minnows by any stretch of the imagination, but England should be doing better.

To be fair, it’s been a highly experimental few months for England. 12 players made their senior international debuts since September, and Southgate tested an unfamiliar system. Nonetheless, it needs a lot of improvement in the upcoming months.