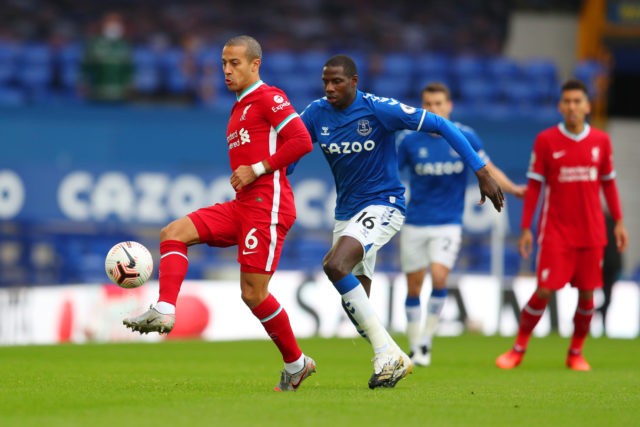 Xabi Alonso has showered heaps of praise on Liverpool summer signing Thiago Alcantara and has backed the midfielder to shine at Anfield.

Thiago joined Liverpool during the summer transfer window from Bayern Munich for a reported fee of £20m, but his short time at the Merseyside club has been blighted by injury thus far.

The Spaniard enjoyed a hugely successful career at Bayern and helped the club complete a prestigious treble last season. In fact, his impressive performance last season has earned a nomination for FIFA 2020 Men’s player of the year.

Alonso – who like Thiago, had played for both Liverpool and Bayern – feels that the Spaniard will fit into Jurgen Klopp’s side seamlessly.

The former Real Madrid midfielder has hailed Thiago as ‘one of the best’ midfielders in the world and has called him a ‘fabulous’ person to be around in a training session.

“I have loved watching Thiago Alcantara, the way he has been able to connect with the attacking players, helping to defend with his special qualities,” Alonso told UEFA’s official website (h/t The Mirror).

“He’s a great friend, but above that, he’s become one of the best midfielders, and he’s a fabulous, intelligent, interesting, fun guy to be around in a training session and a dressing room.

“He loves football; he shows that with his personality and with the way he plays. He’s able to connect with his team-mates very easily. He’s done it fantastically at Bayern, and I feel that he’s going to do it in the same way at Liverpool, and I love it.”

Thiago’s injury and the latest situation

The 29-year-old managed only two appearances for the Reds before he suffered an injury against Everton last month.

Since then, Thiago has missed Liverpool’s last eight matches with a knee injury, but he is expected to return soon.

The former Barcelona midfielder has been pictured in training in recent weeks, but Klopp has revealed that Thiago is yet to resume full training with his teammates, adding his injury was worse than it was first feared.

Thiago was exceptional in the two games he played, and he is expected to make a huge impact at the club.

Known for his amazing passing ability, ball retention capability, and intelligent movements, he brings something different from other Liverpool midfielders.

While Jordan Henderson, James Milner and Gini Wijnaldum add steel and industry in midfield and Naby Keita and Curtis Jones are more box-to-box, Thiago brings balance and creativity that can help unlock the opposition defence.

With the Liverpool squad being severely ravaged by injuries, the return of Thiago and Alex Oxlade-Chamberlain will provide a massive boost to the side.