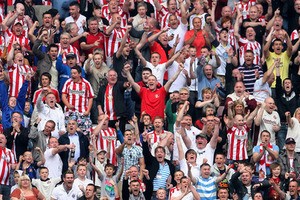 It was so amazing apparently, that Sunderland without any recognized strikers scored three goals in the closing minutes of a decisive game against fellow stragglers Wigan Athletic last weekend. What an achievement, to strike back against Wigan so fiercely as to cast them back into the bottom three, meaning a very nervous last few games for the Lactics. Unbelievable that Sunderland routed Wigan with no recognized strikers.

Well it shouldn’t be! Whilst perhaps you wouldn’t watch football focus, hear that Gyan is going off and immediately think that Wigan are screwed, you can definitely look back at the game and suggest that Sunderland’s forced substitutions did for Rodallega and co, rather then Henderson suddenly acquiring god’s left foot.

But no – everyone latched onto the whole miracle of it all. And miracles to be frank are simply a deity’s way of telling you that you are rubbish enough to need said deity’s help. But anyway… Lets look at the whys and hows of Sunderland’s much needed victory shall we?

‘No-one expects the striker-less formation!’ That is the Monty Python quote isn’t it? Well it’s at least mostly true – there are very, very few teams who have ever really tried anything close to a striker-less team – Spalletti for Roma fluked on the formation in a search for his solution to having no hold up striker and proceeded to use it for his entire stint in charge, and Ferguson used Roma as a template for his double winning side in 07-08.

There are obvious reasons for this lack of use, such as the simple fact that midfielders don’t score as many goals as strikers do, aren’t naturally as skillful, aren’t naturally as aggressive. But if anything this lack of preparation for such a scenario makes the formation as a surprise all the more plausible – and the lack of preparation a team has for such a formation can have disastrous consequences.

For Wigan, it did. Gyan went off with the scores tied, leaving Sessegnon as the man up top. What he essentially did, by either design or accident was take up the false nine role. Usually this is a striker who tricks the opposition defenders into tracking his runs thus opening up space for the wingers and midfielders to attack. Sessegnon is obviously fooling no one into thinking he’s a striker though – he is primarily a play maker apparently, but the change in emphasis the lack of striker gave Sunderland was at least partially a cause of Wigan’s downfall.

The second goal Wigan conceded was a perfect example of the sudden change in Sunderland’s play that Wigan couldn’t deal with. Runs from deep from the midfielders and wingers, combined with Sunderland’s good possession of the ball left Wigan retreating very quickly – the end result of which had three Wigan defenders tracking three Sunderland attackers.

Nobody picked up the umpteenth deep run from all these midfielders, and unluckily for Wigan it turned out to be Henderson who took this opportunity to chest the ball past the defenders and smash the ball home. He’s highly regarded for a reason you know.

The problem for Wigan is simply that they weren’t expecting this sudden surge in attacking runners – why would they? Typically, having no strikers means you score no goals and have little forward momentum. Or perhaps, that is merely a perception caused by conditioned footballing minds… anyway.

Sessegnon’s run for the fourth goal was also very false nine. It wasn’t the run of a striker looking to score, it was one looking to open the space up (very similar to the run that won Sunderland the penalty) and Wigan fell for it hook line and sinker. And again, Henderson punished Wigan to the maximum degree, well and truly putting the game out of Wigan’s reach with Figueroa nowhere to be seen.

Not a miracle by any means. Simply, Wigan weren’t prepared for the extra running that Sunderland made for their goals, and the defenders weren’t prepared for what Sessegnon would do to disrupt the back line.He pulled the back line to pieces, dragging both of the central pairing way out of position to allow Henderson to exploit the space. That is false nine rule number one right there – drag defenders out of position, and let your team mates exploit the space.

The formation may in fact be very useful for Sunderland – considering their lack of strikers, the surprise it could well spring on teams could further improve Sunderland’s healthier looking position in the league. That is, if Bruce figures it out. ‘How do you do it? How do you analyze it?’ Bruce asked in his BBC post match interview after the game, either keeping his cards close to his chest or showing a spectacular misunderstanding behind the circumstances of the goals.

I would suggest if that were the case Steve, that you take a look at the last manager to fall on a strikerless formation at Roma. Because he too, turned to this formation as a desperate measure. And you too Steve Bruce could take this formation and carve Sunderland out success in it’s frame. But he certainly can’t be relying on anymore miracles, because this game was anything but one.