What Went Wrong for Liverpool Against Norwich 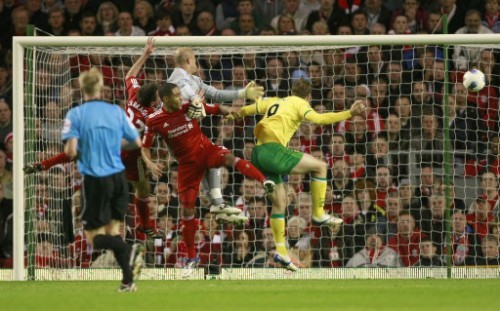 Kenny Dalglish unleashed an attacking lineup versus Norwich still Liverpool were only able to gain a single point from the game. Liverpool had many opportunities in a frenzied contest, but just could not see off the challenge and for worst they conceded. Yet again the slip up at home has left the team and fans disappointed.

Liverpool have had 153 shots in the Premier League this season and scored mere 12 goals. Whereas Manchester United have had 138 shots and scored 25 goals. Against Norwich, Liverpool had 29 shots but converted only one. The anxiety of not being able to finish teams off still remains. Their only convincing win this season in the Premier League was against Bolton winning 3-1 at Anfield.

Luis Suarez is world class. Slippery as an eel, can skip past and between defenders with ease, almost unplayable at times with his movement and control on the ball. Did the same against Norwich, the Uruguayan was havoc in their defense and single-handedly created most chances but missed all of them. He was unlucky at times but few simple ones were hit wide or directly on to the goal keeper.

Luis Suarez had as many shots as the entire United team did last week. Three times as many on target; though 1 less in the net. The finishing department is perhaps the only one where Suarez needs improvement and that would make Liverpool more lethal to finish off opponents.

Stewart Downing Ineffective on the Right:

Downing was shifted to the right wing. This meant that both the wide players having low weak foot abilities most of the times cut back on their favored strong foot, or won’t be able to deliver perfect deliveries from the weak foot. In this way the threat from the wings was minimized.

Although Bellamy was brilliant at one end, Downing was perhaps the flop of the match. His pace in the wings is a threat but the moment he was near the box, he stopped, shifted back to stronger foot and came up with useless shots and crosses during the match. All in all, his end-product was zero.

Liverpool not able to take the chances is one problem; on the other hand the defensive concerns don’t seem to end as well. They have not yet registered a single clean sheet this season at Anfield. Their two clean sheets came at the Emirates stadium and against Everton, where they won 2-0 on both occasions. Just like the frustration upfront, the defensive woes cost them again.

It is not always the luck or the referee or the manager that needs to be blamed. Kenny Dalglish came up with the perfect attacking tactics against a newly promoted side and despite few decisions that went against Liverpool; they dominated the game but still ended up dropping 2 points. The fact remains; Liverpool players have only got themselves to blame.