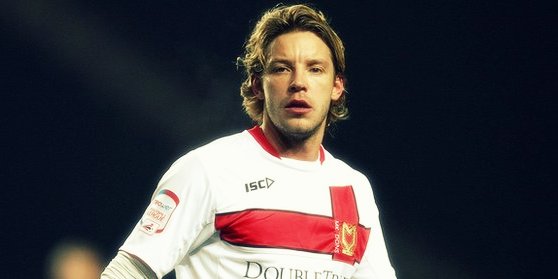 On November 14th 1998, Leeds United travelled to Anfield to face Liverpool in one of the Premier League’s most high-profile games at the time. 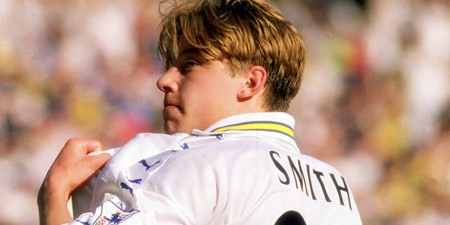 With the home side leading through a Robbie Fowler goal, Leeds manager David O’Leary bought on an unknown 18-year-old by the name of Alan Smith. With literally his first touch in professional football, Smith fired home an equaliser at the Kop end, helping inspire his side to an eventual 3-1 victory.

The papers raved about Smith the next morning, with many excited about this new kid on the block.

They came close to winning the Premier League in the 2000/01 season, and perhaps just a little bit more experience in the side would’ve pipped eventual champions Manchester United to the title.

Leeds also reached the semi-final of the Champions League, eventually losing to an excellent Valencia side. Once again, it was just that slight lack of older players that proved their downfall in the cauldron-like atmosphere of the Mestalla stadium. Smith’s infamous temper got the better of him that night, and he was sent-off late in the game.

That season proved a particularly good one for Smith, scoring 18 goals which, for a player deployed partly as a striker and partly as a right sided player, was an excellent return. 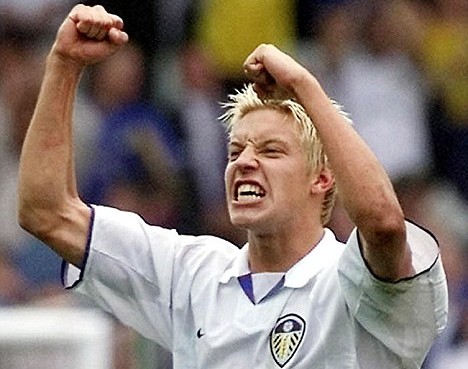 In May 2001, Alan Smith made his England debut against Mexico in a 4-0 win, having represented his country at youth level on numerous occasions already.

Interestingly, Smith’s popularity at Leeds began to increase as the side got worse. Having finished 5th in 2002, they dropped ten places to 15th the following season, and it signalled the end of an era at the club.

While the likes of Kewell, Ferdinand and Bowyer moved on to pasteurs anew in that time, Smith stayed loyal to his boyhood club.

He won the club’s Player of the Year awards in both the 2002/03 and 2003/04 season, the latter of which saw Leeds unthinkably relegated to the second tier of English football. Smith’s tears on the final day summed up his love for the club. It was to be his final game for Leeds.

In the summer of 2004 Smith joined Manchester United for £7 million. While many fans couldn’t understand him moving to their bitter rivals, the fact of the matter was that Leeds were heading into administration, and his transfer fee helped prevent it for the time being.

He scored on his debut for United, in a 3-1 defeat to Arsenal in the Community Shield. On his Premier League home debut he scored a stunning volley against Norwich City, and it looked as though a new hero had emerged at Old Trafford.

Niggling injuries hampered him that season, however, but he did score ten goals despite spending a lot of time on the substitutes bench.

At United, he was slowly being deployed in a deeper role by Sir Alex Ferguson, who saw his tenacious, energetic style as the perfect natural successor to Roy Keane in the engine room of United’s midfield. He was doing a solid job in Keane’s absence through injury, before the game that would change, and perhaps define, his career forever.

In February 2006, United faced Liverpool at Anfield in a ferocious FA Cup 5th round tie. Late in the game, with Liverpool leading 1-0, Smith charged down John Arne Riise’s long-range free-kick. He successfully blocked the shot, but he landed awkwardly, suffering a broken leg and dislocated ankle in the process.

It was one of those chilling moments in a game where every player rushes to the scene and signals to the physio to come on the pitch. You just know it’s a very serious injury. 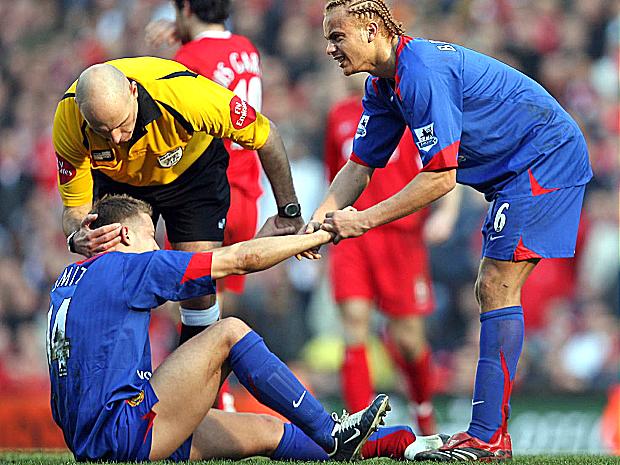 Smith didn’t play football for seven months, and at just 25 still, it was effectively the moment his career started to decline. When Ferguson’s side won the 2006 Carling Cup, all the players wore T-shirts dedicating the victory to Alan Smith.

The 2006/07 season would be Smith’s last at United, and his fitness issues were a constant problem. Perhaps his finest moment in a United shirt came in March 2007, in the Champions League quarter-final home second leg against Roma at Old Trafford.

He scored a brilliant goal, United’s second, in a memorable 7-1 victory. Smith had a superb game throughout. Although his side eventually lost to a Kaka-inspired AC Milan in the semis, Smith won his first, and only, Premier League title at the end of the season.

Smith joined Newcastle United for £6 million in the summer of 2007, but despite some decent spells for the club, he failed to score in his 94 appearances. In fairness he was playing as a defensive midfielder, but it’s still a poor statistic for a player of his calibre.

Smith again showed his loyalty towards a club when Newcastle were relegated in 2009. He played for the majority of 2009/10 season in the English Championship with Newcastle, and his never-say-die attitude made him popular with the Geordie fanatics.

Having spent a spell on loan at MK Dons in early 2012, in which he scored his first goal in five years, Newcastle released Smith in June 2012. He signed a two-year deal with the Dons in July. This season he has made 15 appearances for the League One side, scoring once, and they lie 13th in the table.

It seems a long time ago now that the fresh-faced Alan Smith, now 32, stunned Anfield on his debut over 14 years ago. He has had plenty of highs, from 18 England caps to playing in a great Leeds side, but it is the horrific broken leg that he will be most remembered for sadly. He never really recovered from it.