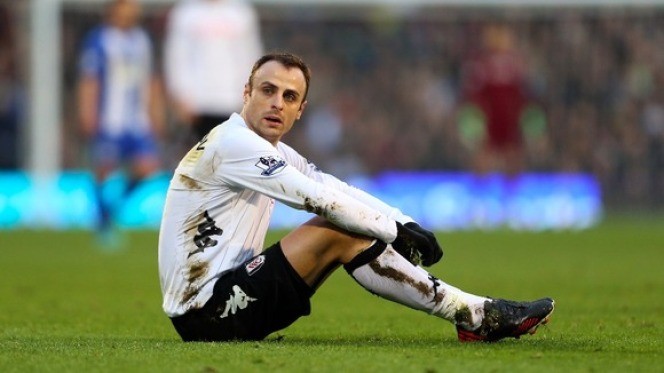 The former Manchester United and Tottenham striker, Dimitar Berbatov, has recently expressed his desire to extend his playing career at the age of 36.

Berbatov has been out of contract since he was released by Greek side PAOK in June 2016, but the Bulgarian is not keen to hang up his boots yet.

The former Monaco striker, who has won two Premier League titles with United, believes he has still plenty to offer at the top level. He said in an interview with BBC:

I’m trying to find a team, if you want to put it like this. I still feel good. I train, I keep myself fit. I spoke with Jermaine [former Tottenham team-mate Jenas] before – it’s difficult to let go. So we’ll see.

Berbatov has been linked with a move to West Ham, but it seems the Hammers are not interested in signing him. An insider at the club told Claret and Hugh that the 36-year-old is too old for West Ham’s liking.

West Ham are in the market for a new striker after loan deals for Simone Zaza and Jonathan Calleri proved fruitless. The Hammers are over reliant on Andy Carroll to get goals, and Slaven Bilic will be looking to bolster that area in the summer.

This one keeps coming up and the story doesn’t have even a grain of truth in it at all.

Dimitar has been a good player but he’s too old for us and has scored very few goals in the last few seasons. Quite apart from anything else, the club has its quota of 25 players and couldn’t sign him under the rules. Only clubs with under 25 players might have a vacancy for him.

Berbatov would have been a good temporary back-up striker for the Hammers. He has a wealth of Premier League experience and the transfer would not have cost West Ham any penny.