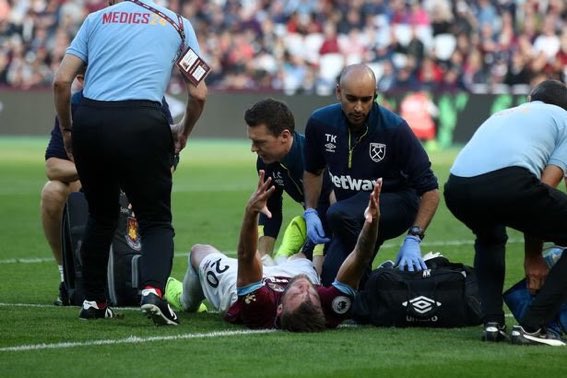 West Ham have suffered a massive blow after reports emerged that summer signing Andriy Yarmolenko will be out for a long period on the sideline.

According to reports from The Mirror, the £22m winger could be out for upto six with a ruptured Achilles tendon. The Ukrainian suffered the injury during Saturday’s defeat against Tottenham, and was seen going down clutching his ankle.

The 28-year-old will undergo an operation this week, and it seems he won’t be able to return until next year.

West Ham fans have taken to social networking site Twitter to express their frustration after the news broke out. Some of the fans feel that they have been very unlucky with injuries this season.

Our injury luck is unbelievable. One of our best summer signings and this happens. Hopefully others will now step up to the plate. Lanzini back, a bit of January business..??

Poor bloke. That’s the season then

So sad to hear @Yarmolenko_9 is out for the rest of the season. Looked nasty when he went down. Rest up and come back even stronger! #getwellandriy #whufc #coyi pic.twitter.com/LbD4duAfb4

Obiang, Yarmolenko, Wilshere and Sanchez all injured. The curse of the West Ham injuries never ceases. Every season there is a injury problem and you get situations where wingers have to play in centre midfield.

The Hammers, meanwhile, have suffered back to back defeats in the Premier League after losing 1-0 against London rivals Tottenham on Saturday.

Erik Lamela scored the only goal of the match, but Spurs were indebted to goalkeeper Hugo Lloris, who made some superb saves to deny West Ham the chance to equalise.