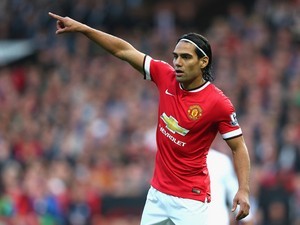 Victory tonight for Manchester United would move them back into the top four to end Premier League matchday 8. You can get football tickets for all fixtures including Premier League and Champions league matches through 1st4FootballTickets.com – although do read our preview before heading there!

West Brom will head into the match only one point above the relegation zone following Newcastle’s win on Saturday. A win for Alan Irvine’s side would put them on level points with United and tied sixth.

Manchester United were 3-0 winners in this fixture back in March with English trio Phil Jones, Wayne Rooney and Danny Welbeck scoring for the visitors. The latter two will not be playing on Monday but Jones is ready to make his return from injury.

Holding midfielder Claudio Yacob will be absent for personal reasons for the home side. Silvestre Varela has been out with a groin injury but is yet to make his Premier League debut anyway.

Victor Anichebe is also a doubt with a groin injury and has only played 1 minute since August.

Louis van Gaal is experiencing his cleanest bill of health since taking charge of Manchester United. Even then, centre-back Jonny Evans is out with an ankle injury and fellow Northern Irish centre-back Paddy McNair is out with a hamstring injury.

Antonio Valencia and Jesse Lingard are the other two players the Dutch manager is missing through injury. Ander Herrera is available again.

Wayne Rooney is serving his second of a three-game suspension. Juan Mata played in his position in the 2-1 victory over Everton at the start of the month. 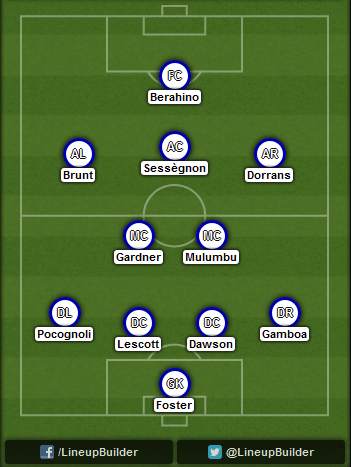 West Brom play the 4-2-3-1 formation. Youssouf Mulumbu and Craig Gardner do a good job protecting their back four in terms of tackles and interceptions. They may struggle with Ángel Di María running at them though. The creativity comes from the wings through Chris Brunt and Graham Dorrans. Striker Saido Berahino is keeping record signing Brown Ideye out of the starting lineup. The England under-21 international has five goals already this season – two from the penalty spot. 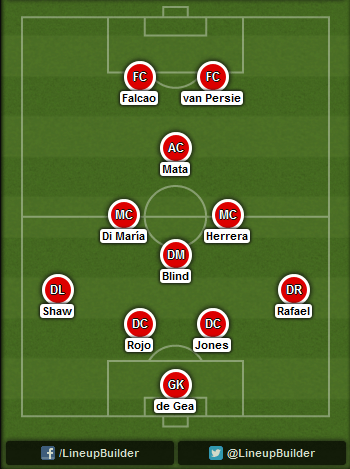 Phil Jones should slot back into the defence to partner Marcos Rojo for the first time. Whether Ander Herrera is fully fit to return and whether Louis van Gaal will start him amongst several other inexperienced players in the Premier League for a Monday night away game remains to be seen. Darren Fletcher, Marouane Fellaini and Michael Carrick are other options.

Ángel Di María vs Youssouf Mulumbu
West Brom’s midfield and defence are going to be in for their biggest challenge of the season if Ángel Di María’s last four games are anything to go by. The Argentine international has been involved in six goals (3 goals, 3 assists) in his last four matches, making a real impact since his record transfer move towards the end of the summer transfer window. We fear for Youssouf Mulumbu and Craig Gardner in that midfield. Both are capable of a strong tackle though to try throw the playmaker off his game whilst running the risk of picking up a yellow card or worse.

Radamel Falcao vs Craig Dawson
Manchester United’s Colombian striker has been involved a lot in goalscoring chances over the past three games He assisted goals in back-to-back matches before opening his account versus Everton. In that game he missed a few good chances before taking one. If Radamel Falcao gets in similar positions versus the West Brom defence, which we know he’s more than capable of, then you can expect to find him on the scoresheet tonight too.

Saido Berahino vs Marcos Rojo
West Brom’s young striker put his name on the map by scoring at Old Trafford last season. Saido Berahino has the pace to cause the Manchester United defence problems again. Marcos Rojo cannot afford a lapse in concentration or pushing too far forward. The United defence hasn’t been too good this season so The Baggies’ top scorer may find opportunities in this game.

Prediction: West Brom 0-2 Manchester United
Manchester United have won three of their last four, West Brom are towards the bottom – we’re going for an away win to put the Red Devils back in the top four. United have it all going for them in attack and it would be a big surprise if they failed to find the back of the net in this one.