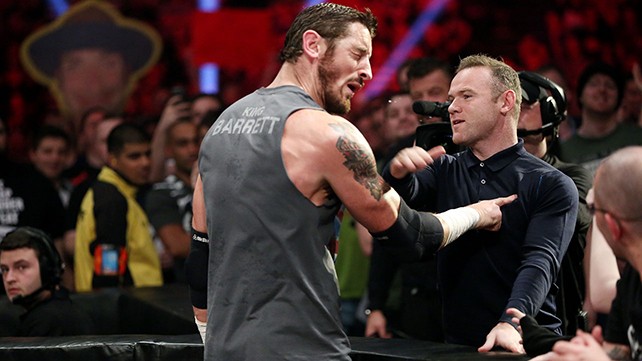 WWE Raw came to Manchester on Monday 09 Nov 2015 where Wade Barrett insulted Wayne Rooney (who was in attendance) only to be knocked out by a single punch.

Manchester United skipper Wayne Rooney may have lost his aggressive instinct on the football pitch, but he is still good enough to knock down the 6ft 7in wrestler Wade Barrett to the floor with just a slap!

Rooney attended the WWE RAW show along with Ryan Giggs and Darren Fletcher at the Manchester Arena on Monday night.

Barrett, who had previously accused Rooney of diving to win penalty against Preston in last year’s FA Cup, didn’t miss the opportunity to take a shot at him again.

How about that @WayneRooney dive vs @PNEFC? He won't need to dive when I catch up with him.. #BullHammer #BNB

And things soon turned ‘heated’ for Rooney, who was seated with his son Kai in the front row at ringside.

Barrett attempted to humiliate the United striker on the mic, saying:

In this ring are two men who can be easily be described as championship material. Which is, of course, more than can be said of Wayne Rooney and Manchester United.

I’d hate for your little boy to sit there and watch his own father fail. Because let’s face it, he gets to experience that every single time you step on a football pitch.

Rooney, unable to withstand the insult, especially when his family was involved, immediately challenged the Barrett to a fight. And as these pre-scripted segments go, Rooney was the obvious winner after landing a one-hit knockout.

The striker’s blow had left Barrett writhing on the floor, as the frenzied crowd chanted his name. The incident was of course scripted and England skipper Rooney ‘revelled’ his role.

I’m heading to Old Trafford early tomorrow morning. I hope @WayneRooney has the guts to meet me there. @ManUtd @WWE https://t.co/AkYs7LedXK

Does anyone have Phil Bardsley’s phone number?

Rooney has managed only two Premier League goals this season but his United manager has backed him to overcome his goal drought. Football isn’t scripted though, so Rooney will have to earn his wins on the pitch.