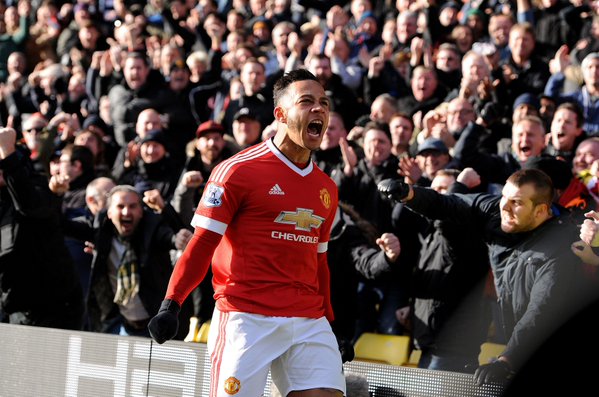 A late goal from Bastian Schweinsteiger earned Manchester United a 2-1 victory over Watford at the Vicarage Road.

Watford forward Troy Deeney scored from the spot in the second half to cancel Memphis Depay’s opener after 11 minutes.

Manchester United made four changes to the side that won against West Brom in their last Premier League game. Herrera, Schneiderlin, Depay and Jones are included in for Rojo, Carrick, Martial and Rooney.

Sublime ball from Herrera into Memphis who caresses the ball on the volley into the top corner. Fantastic goal and it’s only been 11 minutes

Watford wasted a golden opportunity to equalise shortly. Young was robbed on the halfway line by Troy Deeney.

The home side break two on two and he scathes a lovely through pass to his strike partner Odion Ighalo. The striker twists and turns and create space in the box but shoots wide off target.

United went close to increasing the lead, as Schneiderlin, who earlier volleyed over from a tight angle, failed to get a touch after a corner was flicked into his path.

In the 39’ min, Depay tried his luck from outside the box. He cuts inside and fires a low effort towards goal producing a superb save from Gomes.

Daley Blind: Made more tackles (4) than any other player in the first half of Watford 0-1 Manchester United

United started the second half brightly, but Jesse Lingard missed a massive opportunity to double the lead. His left-footed effort brilliantly palmed away by Gomes, who was the busier of the two goalkeepers.

However, it didn’t take long for David de Gea to get into action. The United goalkeeper produced a spectacular save to deny Denney, who connects perfectly from close range but the Spaniard palmed it over.

Lingaard snatched the ball from half way line and hurried quickly to the Watford penalty area. He passed to it Mata, who instead of taking the shot on goal placed the ball on the path of Depay. The Dutchman twists and turns but hits just wide off target with left foot.

De Gea produced a stunning reaction save after Abdi’s strike took a deflection off Chris Smalling.

Lingaard should have killed the game off in the 83rd min, the youngster controlled the ball nicely from a delicious over the top delivery from Blind, he couldn’t chip the ball over the onrushing Gomes.

Manchester finally concede after over 630 minutes, with Deeney restoring parity for the home side through penalty.

Drama at the Vicarage Road. United took the lead again through Schweinsteiger, who pokes at the far post taking a deflection off Deeney on the way.