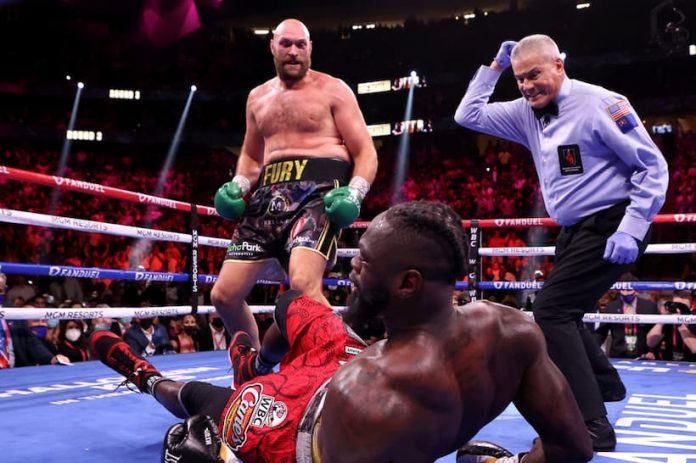 After facing Deontay Wilder on three occasions, Tyson Fury has had his say on how he thinks the ‘Bronze Bomber’ will fare on his ring return this weekend. The heavy-handed American is set to face Robert Helenius on Saturday night, in his first fight back since his knockout defeat to ‘The Gypsy King’ last year.

WBC World Heavyweight Champion and the man who defeated Deontay Wilder twice, has backed his former foe to get back to winning ways this weekend with a knockout victory.

Wilder faces Robert Helenius in the main event from the Barclays Center, Brooklyn on October 15th. ‘The Nordic Nightmare’ will be a tough and durable opponent, but Fury is backing Wilder to get the job done in emphatic style.

In an interview with iD Boxing, Fury have his prediction on how he thinks Wilder vs Helenius will play out this weekend. This is what he had to say:

“I just think that Wilder is a monster puncher and as soon as he lands on Helenius he’s out. I’ve seen Gerald Washington knock Helenius out, and Wilder knocked him out,” said ‘The Gypsy King’.

“He didn’t do much good with Dillian Whyte, Helenius, couldn’t really hurt him and Wilder punches like five times harder than Whyte so, yeah, KO for sure.”

It is just days since the one year anniversary of Fury vs Wilder III. Fury won the fight via 11th round knockout, but Wilder did have the Morecambe man down on the canvas on two occasions. This further emphasises the power the ‘Bronze Bomber’ possesses in his fists.

Fury is set to fight on December 3rd against an unnamed opponent as of yet. However, it has been rumoured that Derek Chisora could be the man in the opposite corner to Fury come fight night.

Fury and Chisora have fought twice before, with Fury winning a wide points decision first time around and with Chisora retiring in his corner the second.

Fury has also stated that a fourth fight with Deontay Wilder in the future isn’t totally beyond the realms of possibility. In a recent interview with Seconds Out, Fury had this to say on a potential fourth fight with Wilder:

“Don’t write a fourth fight off with me and Wilder. You’ve got Usyk, who doesn’t want to fight when we offered him millions and millions to fight in December, he ran away – the b**** don’t want no smoke. Then you’ve got the bodybuilder [Joshua] over here who’s running away from the biggest payday he can ever get and making a million excuses.

“Then you’ve got Wilder in the meantime, if he beats Helenius they’re going to make a final eliminator between him and Andy Ruiz. If he beats Ruiz, guess who’s back again? Big D! I don’t mind because the man wants a fight, it’s a great fight, we’ve had three great fights.

“And if he becomes mandatory again and I don’t get this other fight with this little middleweight guy [Usyk] who I’m just going to run through, then we do Wilder again.”