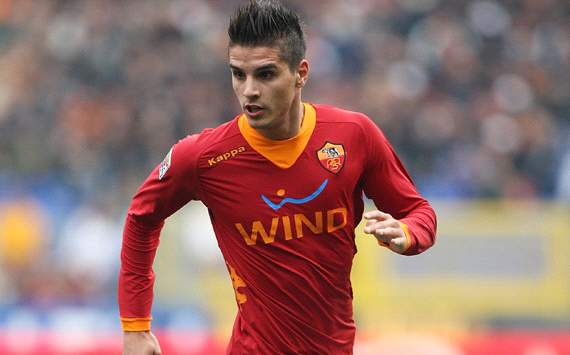 ‘Roma announce they have signed a contract with Tottenham for the outright sale of the playing rights of Erik Lamela, in exchange for 30m euros. The agreement also includes the obligation to pay 5m euros in bonuses related to the achievements of the player and the English club.’ – an official club statement.

The 21-year old has emerged as one of the hottest prospects in Europe in the last 18 months. Tottenham manager Andres Villas-Boas has long-admired the Argentine international, and is pleased to have finally procured his signature.

With Tottenham missing out on Brazilian left-sided forward Willian to London rivals Chelsea, they were very keen to push the deal through for the Roma winger as soon as possible.

Last season, Lamela scored 15 goals in 33 Serie A games – while making 5 assists. His manager Rudi Garcia had expressed a desire to keep him with the Italian club, but also conceded he would let him go for the right price.

His £25M valuation was met by Spurs and he will join up with the London side to undergo a medical.

The signing of Lamela will take Tottenham Hotspur’s spending past the £90M mark. It appears just a matter of time until the sale of forward Gareth Bale to Real Madrid (£94M) takes place – so Spurs will pay off their summer deals using the money made from offloading the Welshman.

Lamela has made no official word on his own transfer news, but sources close to the player are suggesting he believes in the project at hand for Tottenham Hotspur, and he was keen to join manager Andres Villas-Boas.

He could be named in the squad to play against fierce North London rivals Arsenal this weekend.