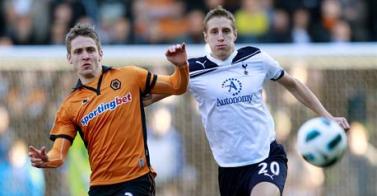 Tottenham Hotspur face a serious test of their Champions League aspirations, away at Wolverhampton Wanderers. Having yet to collect a single point Harry Redknapp’s team must get their season started.

The north London club has endured a tumultuous start to the 2011/2012 Premier League season. The fallout from the London riots prevented them taking to field against Everton, then Spurs were convincingly beaten by both Manchester clubs. This has left Redknapp’s men sitting on an unenviable statistic of zero points and a minus seven goal difference.

Tottenham will be hoping that with the transfer window closed and new signings Emmanuel Adebayor and Scott Parker fit to start, they can claim their first league victory of the season. Luka Modric, who for so long seemed destined for Chelsea still has his number 14 shirt and Tottenham will be hoping his “head is in the right place” this Saturday.

With Rafa van der Vaart injured, Spurs’ creativity will rest on the small Croatian and he will need to be at his best to face an invigorated Wolves team.

Mick McCarthy’s side have survived two years in the Premier League and with the astute purchases of Roger Johnson and former Spurs man Jamie O’Hara, he is looking to push on up the table. The Midlands team early season form points to a possible mid-table finish.

The Molineux stadium has proven to be an uncomfortable ground for Tottenham over the last two years, with only one point collected out of a possible six.

Last season, Wolves’ strike force of Kevin Doyle and Steven Fletcher assisted in destroying Tottenham’s ambitions to re-qualify for the Champions League, by helping Wolves record a good 3-3 draw. During the 2009/2010 season Wolves completed a league double over Spurs, beating the London team 1-0 at White Hart Lane and at Molineux by the same score.

With Liverpool, Chelsea and the two Manchester clubs all making strong starts to the season, Spurs must get back to winning ways. Redknapp will need Adebayor and Parker to fit seamlessly into the starting 11 and provide that touch of quality that Spurs have been lacking for a long time.

The signs for Tottenham are encouraging. At Wembley on Tuesday night, Welshman Gareth Bale, despite playing on the right wing in a 1-0 defeat against England, looked to be back to his best. If he can pick up the form that dazzled late on in 2010, he will surely be too much, even for the much improved Wolves.

I expect Tottenham to line up with a traditional 4-4-2 formation, with Parker along side Modric in central midfield, with Jermaine Defoe partnering supporting Adebayor up front.

It is a must win game for Spurs against Wolves, especially with games against Liverpool and Arsenal just around the corner.