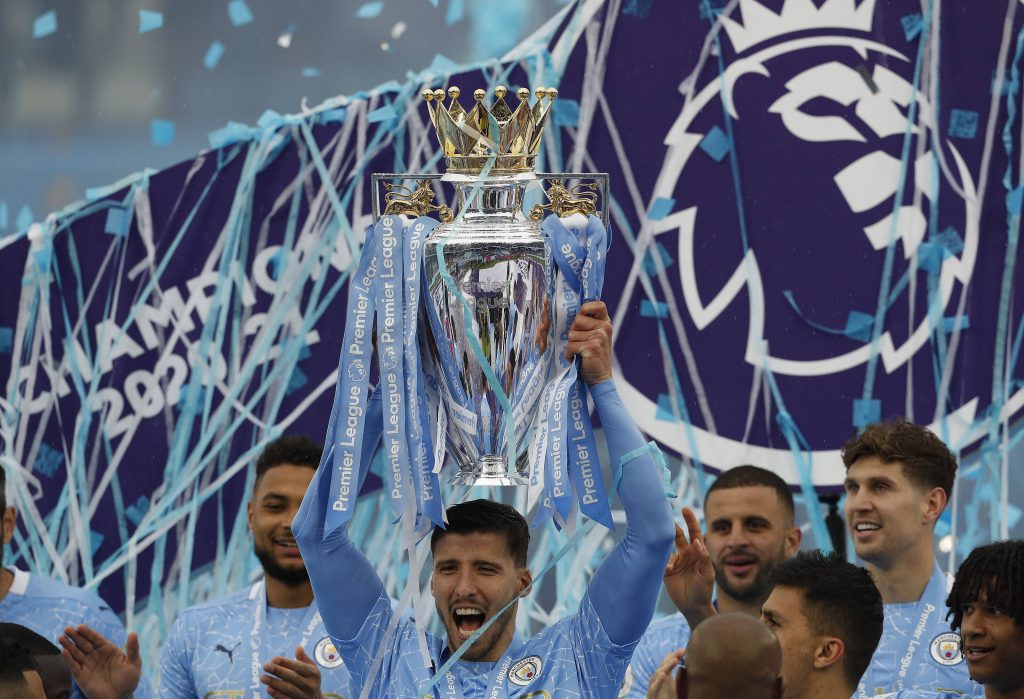 The 2021/22 Premier League season is approaching fast, and managers are working around the clock to reinforce their squad ahead of the new campaign.

Although it seemed like yesterday when Manchester City cruised to their third Premier League title in four years, we are already gearing up for the new season.

Pep Guardiola’s side waltzed away with the title in 2020/21, finishing top of the table with a convincing 12-point lead over runners-up Manchester United.

The latest Premier League betting has the Cityzens as the bookmakers’ favourites to retain the crown next season despite still waiting for the first reinforcement this summer.

Guardiola boasts arguably the strongest squad in the division.

However, Sergio Aguero’s departure for Barcelona requires a new addition in the attacking department.

The reigning champions are currently the 23/35 favourites to lift the title, though those odds might take a downward curve if they complete the signings of Harry Kane and Jack Grealish.

Looking at City’s closest challengers, Chelsea and Liverpool are expected to lead the cashing pack, with Bet365 rating them as the 5/1 second-favourites for the ultimate prize.

Both sides clinched a top-four finish on the final day of the 2020/21 season.

However, Chelsea’s top-four charge began in the second half of the campaign and coincided with Thomas Tuchel’s arrival at the helm.

The German, who took over the reins from Frank Lampard, turned the Blues into a force to be reckoned with, navigating them to the Champions League title this past season.

Chelsea may not be the title material at the moment, but if they manage to land Borussia Dortmund’s Erling Braut Haaland, it could swiftly tip the scales in their favour.

Meanwhile, Liverpool’s underwhelming 2020/21 campaign came as a consequence of a series of injuries.

After spending almost the entire last season on the sidelines, Virgil Van Dijk should be fit to help his side mount a serious challenge on the Premier League title next term.

Jurgen Klopp’s men demonstrated they know in-depth about beating City to the top of the league back in 2019/20, and it is hard to put it past them to replicate that success next time around.

Ibrahima Konate has already arrived from RB Leipzig to strengthen Klopp’s backline, with the Reds currently looking to add a high-profile midfielder to replace Georginio Wijnaldum.

Though it may sound like sci-fi, the Merseyside giants are well in contention for the signature of wantaway Paris Saint-Germain superstar Kylian Mbappe.

There is no doubt that the Frenchman’s potential arrival would give an entirely new dimension to Klopp’s star-studded attacking unit and drastically improve their chances in the title race.

Perhaps surprisingly, Manchester United are deemed fourth favourites to conquer the Premier League next season at 8/1.

The Red Devils have already upgraded their well-knit roster with the addition of Jadon Sancho and are said to be on the verge of capturing Raphael Varane.

A second-place finish this past season suggests Ole Gunnar Solskjaer’s men have what it takes to challenge for the crown, especially considering their slow start to the previous league campaign.