Sponsored Video: Think you know football? Beat KSI to win tickets to a game of your choice 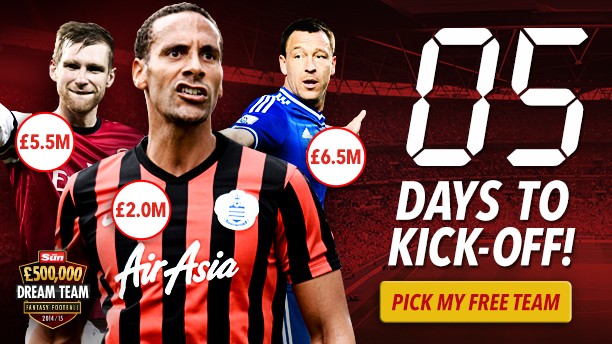 With that comes the start of a new fantasy football season. Something that nearly all of us take part in to beat our friends and declare ourselves the football brains of the group.

How about going one better and winning tickets to a football match of your choice? Dream Team FC are giving you just that opportunity. Watch this quick video from KSI to find out how:

KSI has already revealed he has Alexis Sánchez, Sergio Agüero and… Emmanuel Adebayor in his team. Think you can do better?

Manchester United have added Luke Shaw and Ander Herrera to their squad so far this summer, whilst a number of other talented players have joined the most exciting league in the world.

Chelsea have brought Cesc Fàbregas and Didier Drogba back to the Premier League, along with Thibaut Courtois, Filipe Luís and Diego Costa from Spanish La Liga champions Atlético Madrid.

Everton have signed Romelu Lukaku on a permanent basis, whilst neighbours Liverpool have made a whole host of signings, including the pacey and skilful Lazar Marković.

Manchester City have Chelsea’s all-time top goalscorer Frank Lampard in their team for the first six months. Defensively, Manuel Pellegrini is looking to sure things up at the back with the £32 million signing of Eliaquim Mangala.

Newcastle have made a couple of exciting signings too – Dutch internationals Siem de Jong and Daryl Janmaat, along with Rémy Cabella and Emmanuel Rivière. They missed out on Bafétimbi Gomis who opted for Swansea City instead.

West Ham have also brought in an exciting striker in Enner Valencia who impressed by scoring all of Ecuador’s goals at the 2014 World Cup.

Which players are you most-excited to see in the 2014-15 Premier League season? And who are you going to have in your team?