I’m laying down a challenge. I’ve picked my 11 players for week 11 of the Soccerlens fantasy football game. I’ll be entering the team at the Silver level and competing for the $40 in weekly prize money, but am also challenging you to try and beat me.

My team is below, and my reasons for picking the eleven I did are below that. I’m hoping these boys can come together and pick up a decent points total this weekend. 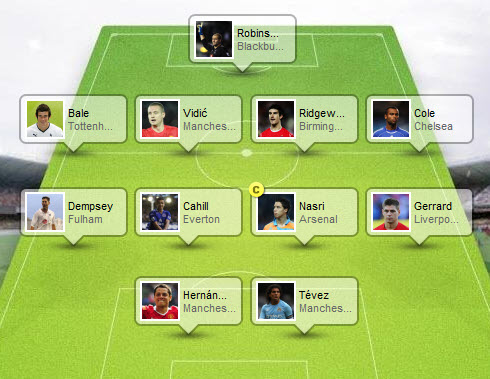 Paul Robinson – The Blackburn keeper is slowly but surely regaining his reputation. Joe Hart won’t be sweating the England goalkeeper jersey, but Robinson could be good for a few fantasy football points, especially with Blackburn at home to Wigan on Saturday.

Gareth Bale – Though I’ve highlighted Gareth Bale’s recent lack of productivity in the Premier League, and Spurs are away to Bolton on Saturday, there’s no ignoring that performance from Bale vs. Inter.

Nemanja Vidic – Wolves are visiting Man Utd at Old Trafford, making Vidic a good bet for a clean sheet, and maybe even a headed goal.

Liam Ridgewell – West Ham’s form has picked up a little, but the Hammers are still bottom of the Premier League, and not a particularly scary proposition for opposition defenders. Birmingham host the Hammers, so I’m thinking Blues defender Ridgewell has a decent chance of keeping a clean sheet.

Ashley Cole – I have no idea what’s going to happen in the Liverpool vs. Chelsea game. I’m not even confident that Chelsea will keep Liverpool out. But Cole has been a fantasy football star so far this season, so he’s in. So there.

Tim Cahill – No goals for Cahill in his last two games for Everton. So it’s about time.

Samir Nasri – Newcastle had a big win at home to Sunderland last weekend, so I’m predicting the Toon Army will crash back down to earth at the Emirates this weekend, with Samir Nasri providing goals and or assists for Arsenal. If he does, I’ll get double points because Nasri is my captain.

Steven Gerrard – Again, it’s impossible to predict Liverpool vs Chelsea. But Gerrard’s off the bench hat-trick vs Napoli suggests a man ready to perform. As with Gareth Bale, I’m hoping European form carries over into the Premier League weekend.

Carlos Tevez – I’ve weighed the pros and cons of picking Carlos Tevez this weekend, and have decided to go for it. Man City’s defeat to Lech Poznan sealed the deal, convincing me that a desperate Roberto Mancini will want his captain back in the team to face West Brom on Saturday.

Think you can do better? Pick your team and join the competition.