Twenty years ago ninety-six people left home to go to a football match. They never returned, crushed to death in one of the biggest sporting tragedies Britain has ever seen.

This week, the City of Liverpool will remember those whose lives were cut short on that fateful spring day in Sheffield. Their names will live on but, more than that, their deaths, both directly and indirectly, changed the face of modern football as we know it.

The tragedy that changed the face of football

Bar the seating issue, it is perhaps hard to quantify the exact level of impact the Hillsborough disaster has had on the state of the game today, but there’s no doubt that that impact is there. Some of the changes post-Hillsborough have not always been for the best, while some have improved the game immeasurably. That it should have taken the deaths of 96 fans to make these improvements is nothing short of a tragedy.

One of the surprising aspects of Hillsborough is that such a disaster hadn’t already occurred, as clubs, paying lip service to safety in crumbling grounds desperately in need of renovation, herded as many fans as possible into grounds to maximise gate receipts. This wasn’t Bradford – there was no fire. This wasn’t Heysel – there was no rioting. This was a combination of poor safety standards and poor decision making on the ground from those in charge. It was a disaster waiting to happen.

In the 1981 FA Cup semi-final between Wolves and Spurs, also held at Hillsborough, Spurs fans had to climb over the fences to escape the crush in the Leppings Lane end. That day, no-one died. Eight years later, it was very different. The safety certificate for Hillsbrough wasn’t valid, the tickets and the signs were badly designed, adding to the confusion and the policing of the event led in part to the tragedy.

The story should be familiar by now but, due to the misinformation from the police and the subsequent horrific front page from The Sun (the paper is still blackballed in Mersyside) myths still abound. And, while the legacy on the football side has had its successes, the families of the 96 are still to this day fighting for justice. 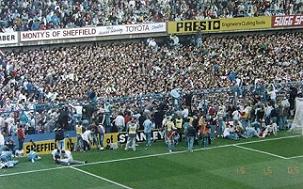 On that fateful day – April 15 1989 – thousands of Liverpool fans set off for their FA Cup semi-final against Nottingham Forest. The supporters were in high spirits, confident they could take another FA Cup back to Anfield. The perfect spring day added to the carnival atmosphere.

As kick-off approached, a queue and then a crush developed at the Leppings Lane end, the end allocated the the Liverpool fans. The segregation arrangements meant that Liverpool had not only been given a smaller, more cramped part of the ground, but had just seven turnstiles servicing over ten thousand fans. By half past two, fans were already struggling to get in.

Meanwhile, inside the ground, the majority of Liverpool fans in the Leppings Lane terrace headed for the pens behind the goal, swelling the numbers and starting to crush those already on the terraces. The pens had been introduced to combat the rise of hooliganism on the terraces, but it also meant that if there was an emergency, the fans could potentially become trapped.

Outside the ground, and faced with a swell of anxious Liverpool fans, the police officer in charge of the game that day – Chief Superintendent David Duckworth – ordered Exit Gate C to be opened to ease the crush outside the ground. He would later claim drunken Liverpool fans forced the gate open.

With poor signage and a lack of stewards to point them in the right direction, the Liverpool fans headed for the already full-to-capacity pens behind the goal. With no where to go, the crush got worse. Fans literally died on their feet, the life sucked out of them as they became trapped in the pens designed for their own safety.

Amazingly, the game kicked off at three o’clock. A few minutes later Peter Beardsley hit the bar, causing another surge forward. Eight minutes into the game it was called off as the police finally opened a gate, allowing fans out of the pens, some of them carrying the dead and dying.

Only one ambulance was allowed into the ground, while another 43 waited outside on the orders of police, who told the paramedics there was fighting. Bodies were lined up on the site of the pitch as the survivors desperately tried to save friends, family and strangers caught in the crush. In the back of an ambulance, Trevor Hicks tried to clear the vomit out of his dying daughter’s airwaves. In Liverpool, a young Steven Gerrard was taking in the news that his cousin, 10-year-old Jon-Paul Gilhooley, had become the youngster casualty of the disaster.

As the true picture began to emerge, first from the news reports in the days following, and then at the Taylor enquiry, which laid much of the blame on the police and failures from Sheffield Wednesday, the nature of football was slowly beginning to change forever. 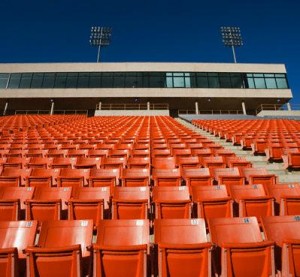 The most obvious legacy to come out of Hillsborough was the introduction of all-seater stadiums for the top two tiers of English football. Although the Taylor Report didn’t blame terracing for the Hillsborough disaster, it did conclude that football would be safer with sitting room only. The primary reason for dispensing with terracing, though, was an attempt to eliminate hooliganism from English football.

In the 80s football, although slowly laying the seeds to become the all-consuming behemoth we know today, still had a serious image problem. Police then often lumped genuine supporters in with those intent on causing trouble, one of the reasons for the force’s attitude towards the fans at Hillsborough. What followed – the sense of community and shock across Mersyside and through all football supporters – showed that the sport was not just a past-time for the working class and trouble makers, it was worshiped by all aspects of society.

Nevertheless, the authorities lobbied Taylor hard for the all-seater recommendation. The police viewed it as easier to identify and target trouble makers on CCTV if they were sat, dispersed, rather than lumped in one group on the terraces.

One alternative, lingering in the wings, was the Tory government’s plans to bring in ID cards for football fans to control disorder. Luton Town (run by future MP David Evans) were a side who had introduced such a scheme, effectively banning away supporters. Many in the game argued that ID cards would slowly kill football. Instead, Taylor’s recommendations gave it a new lease of life and killed off the ID card scheme.

Football was already changing at the point of Hillsborough. A year later, we had Italia ’90, Gazza’s tears, Pavarotti as a soundtrack, and the entire nation – young, old, working class and middle class alike – was gripped to the TV screen, willing England on to the final. There was a appetite for football; an appetite Rupert Murdoch noted and gambled on to haul his satellite TV company, Sky, out of financial difficulties and into the beast it is today.

And combined with this groundswell, football was becoming safer. The level of comfort seating afforded attracted a new breed of football fan – one with a family, who wanted to take their seat five minutes before kick-off, watch the game in relative comfort and leave, all with no risk of fighting or injury on the terraces. The plush, padded seats at the Emirates are a world away from the cramped death traps at Hillsborough and other grounds in the 80s.

Taylor was optimistic that prices need not rise to cover the cost of the new stadiums – public money was available and at Ibrox, recently converted to all-seater after its own 22-death tragedy, the cost was only £6. Allowing for inflation, that should be around £16 today.

Instead, as clubs welcomed an increase in supporters with more disposable income, the prices kept moving up. Yes, some hooligans were priced out of the game, but others still found ways to get tickets. Also priced out were those on lower incomes and teenagers. The rise of Sky may have lead to football becoming an all-consuming national past-time but it also means it’s never been easier for fans not to go to a game. In the top two flights, supporters groups are warning that the makeup of the crowds are getting steadily older.

A return to standing? 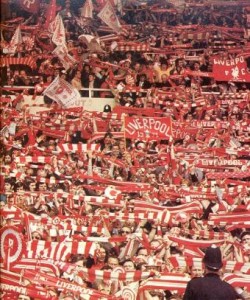 The ongoing campaign or safer standing, which has been been active since Hillsborough, has countered that a return to terracing would help counter many of the issues fans feel with football today. It would create an atmosphere, it would lower prices for that area of the ground, and could even increase capacity.

Terracing is not, in itself, unsafe. If it was, the lower leagues would have been forced to replace the stands with seats years ago. Proponents of safe standing will point to the Bundesliga, where crowds are rising, tickets are cheaper and fans happily stand at top-of-the-table matches. Shalke’s Veltins Arena is an excellent example of this.

And on Mersyside, there’s a possibility safe standing may make a return to the top flight. Everton’s proposed new stadium, if it ever gets built (and that’s a completely different issue), is flirting with the idea of a section of terracing. Whether the authorities would ever counter a return to terracing is another matter, not because of safety concerns but because of fears of a return to hooliganism. It is a moot point.

Hillsborough’s legacy, then, is as long as it is varied. All seater stadiums have helped make the Premier League part of what it is today. The changes may well have come eventually, but the disaster was a catalyst of sorts. But neither is it to blame for the high prices and perceived lack of atmosphere at top flight grounds. It was a shocking event that launched many changes in the social makeup of football in Britain. Changes upon changes have a habit of taking on a life of their own.

But what nobody can dispute is that football is a much safer sport to watch in 2009 than it was in 1989. When ninety-six people died on that fateful day in Sheffield, it meant that never again in Britain would people die just to watch the game they loved.