Manchester United travel to the Stadium of Light on Sunday in search of their first points of the 2014-15 season and first under manager Louis van Gaal.

The Red Devils suffered a surprise defeat at home to Swansea City last weekend to start their season. They reacted by paying £16 million for the services of Argentina left-back Marcos Rojo during the week.

Larsson scored the only goal when these two sides met at Old Trafford back in May. The 3 points all-but confirmed Sunderland’s safety with two games to go and was their first victory at Old Trafford in the Premier League era.

This fixture last season saw Adnan Januzaj introduce himself to the Premier League with a brace that won Manchester United the game, 2-1.

Emanuele Giaccherini and Billy Jones are both out through injury. The Italian international is a loss in midfield whilst Jones has yet to make his debut following his arrival from West Brom in the summer.

Marcos Rojo could make his Manchester United debut this weekend having only arrived from Sporting Club on Wednesday. The Red Devils are light at left-back with Luke Shaw injured and Ashley Young playing 45 minutes there in the second half last weekend.

As well as Shaw, Michael Carrick, Danny Welbeck, Marouane Fellaini and Anderson are all ruled out through injury. Jonny Evans, Antonio Valencia and Jesse Lingard are all doubts on a large injury list. Robin van Persie looks set to make his return. 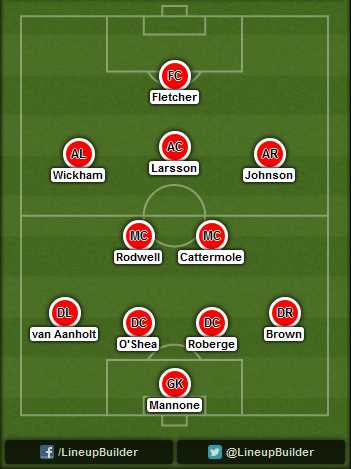 This is the Sunderland line-up that started at West Brom. There are no real concerns for Gus Poyet to make any changes. Valentin Roberge struggled at the Hawthorns, as did a number of players on the opening weekend. 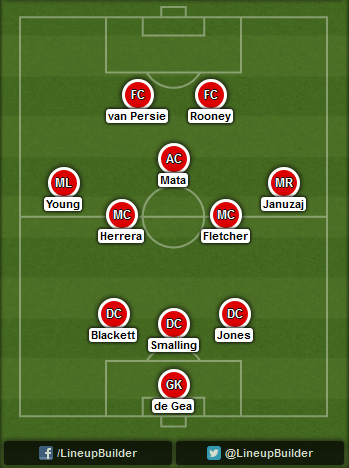 We’re predicting Louis van Gaal will stick with his 3-4-1-2 formation that worked well in pre-season, despite switching to a 4-4-2 in the second half last week. He has a left-back in Marcos Rojo who could not play in a back four but we don’t see the Argentine playing in a back three days after his arrival. Robin van Persie to partner Wayne Rooney will be a massive boost in attack. Juan Mata and Ander Herrera had quiet games last weekend – much more is expected of the expensive and talented Spanish duo.

Wayne Rooney vs John O’Shea
The Manchester United captain was about the only player to come away with any credit for his performance last weekend. He has the beating of former teammate John O’Shea for pace and power. The Irish defender is experienced and knows the tricks but he’ll have a difficult time keeper the England international quiet for 90 minutes.

Juan Mata vs Lee Cattermole
The Spaniard had a quiet game last weekend, much like Wesley Sneijder did for a lot of the 2014 World Cup in the same role for the Netherlands under Louis van Gaal. The Spaniard’s corners were generally poor but one did lead to their goal. Lee Cattermole is a tough-tackling midfielder so Mata should at least be able to win his side some free kicks. It’s not the quickest of defences and whilst United don’t have the quickest of attacks, they have a player in Juan Mata who is more than capable of unlocking the back four.

Prediction: Sunderland 1-2 Manchester United
Expecting a great improvement on last season under Louis van Gaal, I’m expecting Manchester United to put last weekend behind them and pick up some points on their travels on Sunday. Leaning towards a win when looking at their strike force versus Sunderland’s defence on paper.