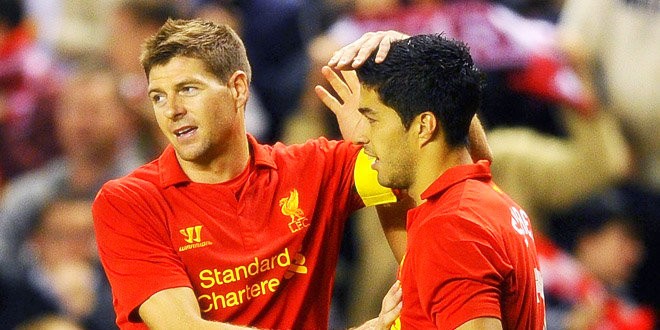 Liverpool skipper Steven Gerrard vows to try his best to take his beloved club back in the Champions League admitting fears that failing to do so, could mean departure of star striker Luis Suarez from the club.

After the 2-1 defeat at the hands of Manchester United at Old Trafford, it seemed like Liverpool’s slim chances of making it to the top four had withered away. But after eviscerating Norwich City 5-0 at Anfield on Saturday, that hope still lingers.

Reds talisman Suarez and new signing Daniel Sturridge combined brilliantly against a hapless Norwich side and Gerrard understands they need to make silk purses out of sow’s ear in order to close the gaps with teams above them.

A player of Suarez’s calibre deserves a chance to play in the Champions League and though the Uruguayan has committed a long term future at the club, according to Gerrard the onus is upon him and his team-mates to make him stay at the club providing him the right platform to further his career at Anfield.

Gerrard, who attended a tribute dinner held by the Football Writers’ Association in his honour, said in an interview:

“I know that he’s comfortable and he’s happy here. But I think that’s a question for Luis to answer.

“Only he knows what his ambitions and dreams are. He’s gone on record recently and said he’s really happy and comfortable here.”

Recently, the Uruguay international gave an interview with Fox Sports Argentina, where he admitted that he dived to earn a penalty for his side that irked Liverpool manager Brendan Rodgers and as a consequence had to deal with a public rebuke.

While Suarez’s tenure at Liverpool has been littered with controversy, Steven Gerrard is reluctant to look into the bad side of him, rather he feels lucky to have a player like him in the side.

Meanwhile Suarez’s strike partner Sturridge, who became the second player after Ray Kennedy to score three goals in three matches, feels that he is already developing a telepathic understanding with Suarez and expects their partnership to flourish in coming days.