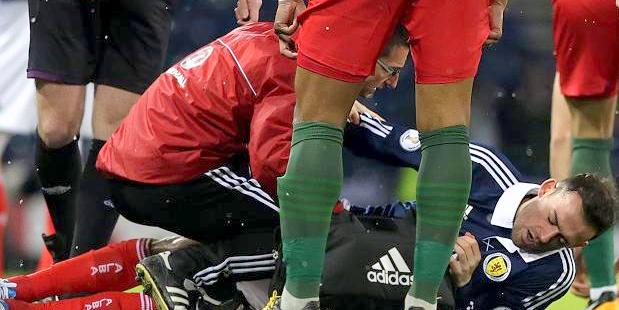 Sunderland have suffered a huge blow today with the news that striker Steven Fletcher has suffered ankle ligament damage and could miss out actions for reminder of the season.

Fletcher landed awkwardly against Wales on Friday in the World Cup Qualifiers while playing for Scotland and was stretched off immediately.

After the first scan it was revealed that there were no fractures. However, the striker would miss four to six weeks after getting the confirmation of ligament injury. Further, he could miss out the rest of the campaign should his ankle require surgery.

Steven Fletcher was the one of the bright performers for the Black Cats this season. The 26-year-old has scored 11 goals so far (three assists as well) – which is one third of the total goal scored by the entire team this season. That shows how badly Martin O’Neill’s side are dependent on his goal scoring form.

In fact, his drop of form since December (4 goals in 14 matches) is one of the main reasons why Sunderland have been struggling badly in the Premier League.

Sunderland are 15th in the table with 31 points and just four points ahead of Wigan who are 18th in the league. No way, they can breathe sigh of relief. With one victory in nine games, the position doesn’t look safe at all. Without Fletcher in the side, the task will become lot difficult from here on.

If any time Sunderland needed their best player to give everything for the team’s survival it is now. If the poor current form doesn’t induce scare, the thoughts of facing Manchester United, Chelsea, Newcastle United, Everton and Tottenham would definitely strike fears among the Stadium of Light faithful.

Danny Graham was bought from Swansea in the January transfer window for £5 millilon to support Steven Fletcher in the attacking department. The Englishman has failed to adjust to the new system and his introduction has led to ramifications only.

Graham hasn’t scored a single goal since his move and in absence of Fletcher; the pressure will be on his shoulder to deliver.

O’Neill is faced with the onerous task to motivate his players to step up the plate in absence of the star striker. Most importantly he will have to come up with tactical smartness to counter this problem.

Instead of deploying two strikers together – Graham with say Connor Wickham – it will be wiser decision to let the Swansea man operate upfront all by himself.

These are indeed tough times for Sunderland. The competition for survival will be fierce and they can only hope other relegation candidates also drop precious points till the end of the season. Losing Fletcher at this point of the season is indeed a massive blow for the team.