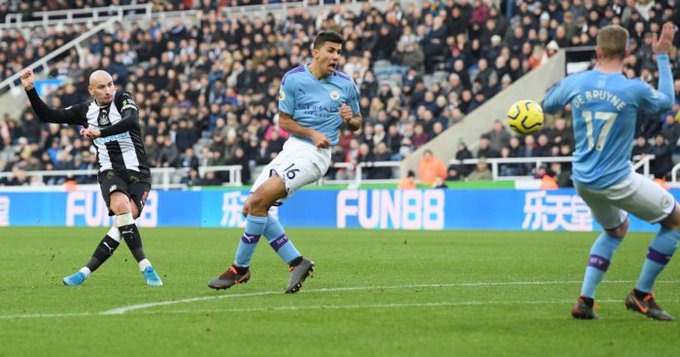 Former Newcastle player Steve Howey took to social networking site Twitter to express his reaction after the game. He wrote:

Kevin De Bruyne scored one of the goals of the season eight minutes from time to seemingly seal a vital three points. But Shelvey stepped up to earn a crucial point and made sure Newcastle stay unbeaten at St James’ since the opening day defeat to Arsenal.

City took the lead in the 22nd minute when David Silva’s backheeled pass allowed Raheem Sterling to curl in the opener.

The Magpies levelled three minutes later when left-back Jetro Willems linked up with Miguel Almiron before the Dutchman fired in.

Although Pep Guardiola’s side climbed to second with their point, they could fall 11 points behind leaders Liverpool should Jurgen Klopp’s side defeat Brighton later on Saturday.

Newcastle move to 12th in the league table.