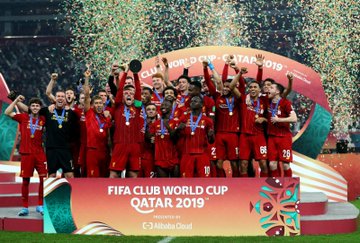 Liverpool are officially the best club team in the world after beating Flamengo in the Club World Cup final.

The Brazilian, who scored a dramatic injury-time winner against Monterrey to send Liverpool into the final, scored a brilliant goal in the 99th minute as the Reds became the second English side to win the tournament, after Manchester United in 2008.

Former Liverpool striker Michael Owen took to social networking site Twitter after the game to share his reaction. He tweeted:

Congratulations to @LFC on winning the FIFA Club World Cup!

Thoroughly deserved for the way they’ve performed over these last twelve months and now need to find a place in their trophy room for a new piece of silverware! pic.twitter.com/28V7ilsgbB

Congratulations to the staff, players and fans of @LFC

The Most Successful Club In English Football History ™️

Liverpool started brightly and Firmino had a superb chance to score inside the opening minute. Naby Keita also came close to scoring. However, Flamengo grew into the game and Joe Gomez made a superb block to deny Gerson which was arguably their best chance of the first half.

In the dying seconds of the game, Sadio Mane was brought down by Rafinha and the referee initially awarded a penalty. But after a lengthy VAR delay, the referee overturned the penalty.

In the extra time, Liverpool broke the deadlock from wonderful counter-attack – started by a superb pass from Jordan Henderson to Mane Mane who then set up Firmino and the Brazilian coolly slotted home.