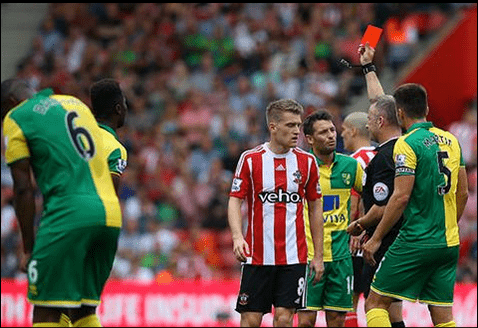 Norwich City’s young manager Alex Neil had an important statistic backing him up when his side faced a trip to Southampton Sunday afternoon. The 34-year-old Scot had never experienced a defeat on the road since taking charge of the Canaries back in January this year.

Neil’s impressive away record looked over after the first half hour at St Mary’s when one of his more experienced players committed two fouls, one of them Neil calls “silly”, to hand the Saints their long overdue first win of the season. Steven Whittaker might attract all the blame for Norwich’s shambles, and rightly so.

The Scotland international’s first red card in the Premier League was a fit of naivety which largely undid most of the good work Norwich had done until then. The Canaries were measured in their approach, and looked the more cohesive of the two teams in attack with their cultured passing game.

But it was all to be the Whittaker sideshow; the 31-year-old is only a few years younger to his manager and was the second oldest player in yesterday afternoon’s starting eleven behind Wes Hoolahan. Experience-wise, Whittaker is one of the senior players in his side but his two yellow cards in the space of four minutes was the stuff of a rookie.

Neil was right to lambaste his right-back post game, pointing to the defender’s sending off as the reason his side suffered defeat. “The first one was a bit harsh but the second one was a silly decision, and it’s ultimately cost us,” lamented Neil.

Norwich had a more symmetric look about them after a difficult opening period as they circulated the ball with basic passing football and created the best opening when Cameron Jerome missed a glancing header from close range from a Graham Dorrans’ volleyed cross in the 20th minute.

They squeezed Southampton in their own defensive third, and allowed little space for Sadio Mane to run into the channels. Set pieces were the Saints’ best hope for a goal, while the Canaries grew into the game. Until, of course, Whittaker took matters into his own hands.

What is baffling about Norwich going down to ten men was the fact Whittaker’s two yellow card offences were avoidable. His first booking was due to his impedance on Southampton left-back Matt Targett when the youngster tried to take a quick throw-in deep inside Norwich’s half.

While his second bookable offence highlighted his naivety as Whittaker tugged back left winger Dusan Tadic who tried to run for a through ball which was clearly overweight and heading into the goalkeeper’s feet. A player for whom Premier League experience is not lacking, decision-making at a key juncture meant Whittaker failed his side.

The top flight is often an unforgiving place for minnows, and Whittaker and Norwich were handed an important lesson early days into the 2015/16 campaign. Stakes are higher than ever, while margins are even more finer. With Bournemouth the visitors to Carrow Road after the international break, Neil’s Norwich has a rear guard tinkering job against a team which have netted eight goals in their last two away games.