Fiorentina extended their stay at the summit of the Serie A after beating Sampdoria 2-0 at the Stadio Luigi Ferraris.

Josip Ilicic, a reported target for Liverpool, gave the Viola an early lead through a penalty. Nikola Kalinic doubled the lead in the second half to give Paulo Sousa’s side full three points.

Fiorentina are joined by Inter Milan at the top of the table, with only goal difference separating the two sides. A first half strike from Geoffrey Kondogbia earned a comfortable 1-0 victory for the Nerazzurri.

Juventus recovered from a goal down to register an impressive 3-1 victory against Empoli. Mario Mandzukic cancelled Massimo Maccarone’s strike, before Patrice Evra and Paulo Dybala scored to earn three much needed points for the Old Lady.

The weekend’s biggest attraction however was the Rome Derby, where Roma emerged 2-0 victorious from the season’s first Derby della Capitale against Lazio. Former Manchester City striker Edin Dzeko scored his second goal of the season from spot kick, while Gervinho added another in the second half to seal the victory for Rudi Garcia’s side.

Let us check all the results from Serie A Week 12 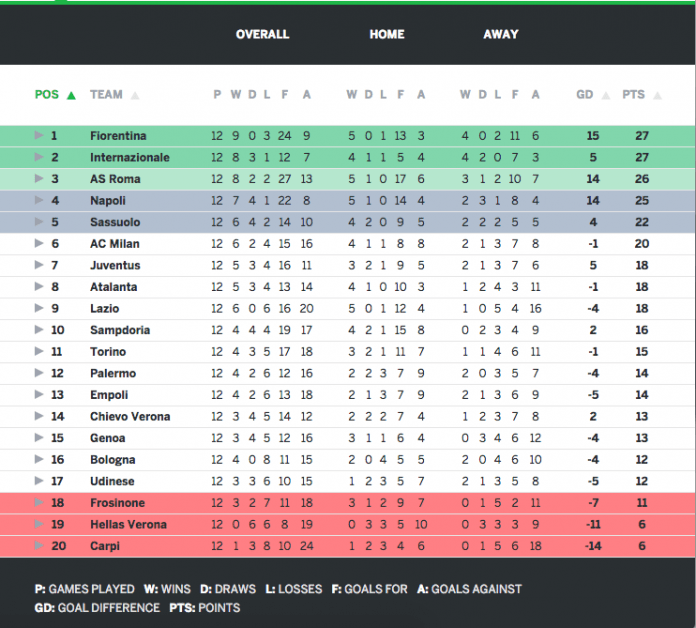 Seria A Top Scorers After Week 12

Three Major Talking Points After Round 12

* Dzeko slowly is turning out to be a big match player for Roma. The Bosnian striker has struggled to find the net on a regular basis this season since his big money summer move from Manchester City. In fact, he has only scored twice this season, including his goal against Lazio. His first? Against Juventus.

The latest edition of the Rome derby was played out in front of thousands of empty seats in protest over increased security measures at the Olympic Stadium in Roma.

Roma and Lazio, both share the stadium, were ordered by local authorities to introduce the measures to enable police to enter the areas in case of crowd trouble. Fans are unhappy over the decision to erect extra barriers in the ‘curve’ behind the goal.

* Free scoring Viola are a treat to watch. After a slight dip in form in mid-October, where they lost three consecutive games in all competitions, the Viola have turned the tide in their favour with three consecutive wins in the league. They have lost against big teams (read as other title challengers) like Napoli and Roma in the Serie A, but have been simply ruthless against mid-table or lower oppositions.

* Napoli are unbeaten in their last 11 league games. The Naples lost their opening match of the season to Sassuolo, and picked up only two points from their opening three league games. Since then, Maurizio Sarri’s side have gained a solid momentum, winning seven of their last nine games, and are fast becoming a serious contender for the Scudetto.