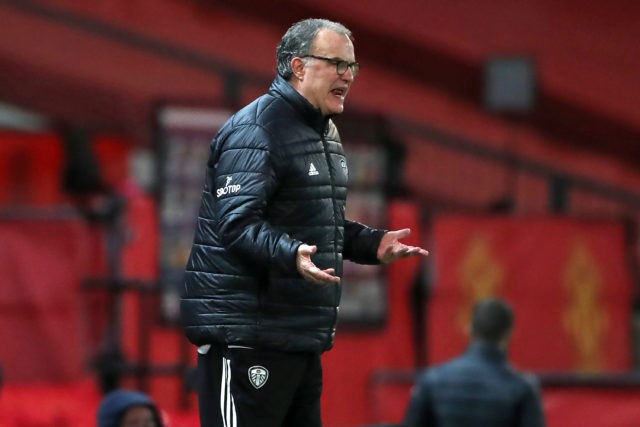 Former Manchester United midfielder, club legend and now football pundit Roy Keane has told Sky Sports that Leeds United have been outstanding this season, despite their 6-2 defeat against his former club.

The Whites suffered a heavy defeat against their bitter rivals, with United exploiting their high-intensity approach.

Scott McTominay scored two goals inside three minutes, while the likes of Dan James and Bruno Fernandes found the back of the net as well.

After the game, Keane has said that the key thing for Leeds is survival, and they have enough quality in them to avoid relegation.

Keane is heavily impressed with their gung-ho approach and says they are an entertaining side to watch. He said:

“The key for Leeds is survival. With the points they’ve so far, it’s outstanding. I think Leeds will be fine,” said Keane to Sky Sports.

“We talk about sport being entertaining, and that’s what they do. They had a lesson from Man United, but Man United are a very good team. But overall, the manager was asked about changing his ways, but his belief is what makes him a great coach.

“I think they’ll stay in the league, and they’ll tweak it and learn, but he’s not going to change his ways of coaching. All the top coaches and managers are very stubborn.

“We saw that a bit in the interview there, he was getting frustrated with some of the answers as if he has to justify to the media what he’s doing with players and substitutions.

“I think Leeds will be fine, we enjoy watching them. They’re having a go and their points return – for a promoted team – so far has been excellent. You look at the other couple of teams that came up with them, they’d do anything to swap with Leeds.”

While Leeds are an exciting side to watch, they are equally vulnerable at the back.

They have been conceding goals in every game, and Bielsa doesn’t want to tweak his system and style. It is the only way they know to play, one that earned them promotion to the Premier League last season.

Bielsa is well respected around the world, and he won’t change his philosophy. Leeds will not abandon their style of football, irrespective of the result.

The Leeds defence is conceding goals very easily, and that should be Bielsa’s prime concern. The Argentine is currently without two key defenders in Robin Koch and Diego Llorente, and the back-line is failing to exude any confidence at the moment.

Keane is absolutely right with his assessment. This season, the priority for Leeds will be to secure safety and then build on from there. And there is enough evidence to suggest that of all the newly promoted teams, they’re the most likely to survive.