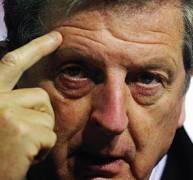 As touched on in this morning’s news round up, the general consensus emanating from the nation’s press circle this morning was that Liverpool manager Roy Hodgson is now surviving on borrowed time at Anfield and developments this afternoon have done nothing to help truncate that particular line of conjecture.

After suffering the ninth league defeat of his six-month tenure against Blackburn (3-1) on Wednesday night, Hodgson was uncharacteristically abrupt in his post-match interview, huffing that he was ‘too depressed’ to answer yet another torrent of media queries over his immediate future at the club:

“I am not prepared to talk about that because obviously I am depressed enough with the performance and the result. I have no comments to make and I have no intention to answer any questions on the subject.”

With that statement, the brief press conference was called to an end by Liverpool’s director of communications, Ian Cotton.

‘Bleak’ instantly became the buzzword used to describe Hodgson’s outlook by the gossip-hounds and scandal merchants of the nation’s journalistic population.

Time will tell as to whether or not their initial response was merely a direct reaction to the agitated umbrage with which they were collectively snubbed by their beleaguered protagonist after the Blackburn defeat, or whether the media’s hyper-sensitive retort proves indeed to be slap bang on the button, though, with time becoming an ever-more scant commodity at Anfield as their wayward season trundles on, you can’t help but feel that Occam may have been right about his razor after all.

The fore-bearers of impending doom are once again circling over Melwood this afternoon after Liverpool announced via their official website that a 1:30pm press conference (due to be headed by Hodgson) pertaining to Sunday’s FA Cup third-round clash with Manchester United had been cancelled less than two hours before it was due to begin.

In an attempt to ease any speculation about Hodgson’s immediate future that the cancellation of the conference may have prompted, the club also released details of an interview with the manager (in which he previews the weekend’s headline cup clash at length) that they plan to post on their website and broadcast via their in-house television channel, though it seems that such a token gesture will not be enough to sate the incessant whims of the press at large.

As an aside, regardless of Hodgson’s supposed shortcomings, I can’t help feeling that, were I of the Liverpudlian persuasion, I’d currently be focusing my righteous ire at the seemingly non-plussed playing staff – a reemerging trait that was rearing it’s ugly head long before the current incumbent took up the reigns at Anfield.

Hodgson did not introduce this malaise to the current squad, his only failing is that he has failed to patch the swelling number of ‘leaks’ in the time given to him by the fans.

The all-pervading ill-feeling brought on by the Liverpool’s (very) recent decline is now set in a state of almost self-perpetuating repetition, due chiefly to the unwillingness of the majority of interested onlookers to admit that the current squad and their accompanying mindset is just not good enough to live up to the sense of prestige that the club’s last golden age instilled their supporters over twenty years ago – a gloating self-entitlement that is now merely running on fumes.

It’s perfectly reasonable that you should want more from your team, but you don’t deserve it (no-one does) and constantly haranguing your chosen scapegoats until you get it is certainly not the way to go about turning the club’s fortunes around.

Liverpool have not become an abjectly rotten side (far from it) in the space of six months and Roy Hodgson should never have been branded as such a hopeless entity so early into his stint on Merseyside, but a failure to adopt any semblance of clarity or renewed realism looks set to ensure that the two parties are now almost  fate-bound to part company.