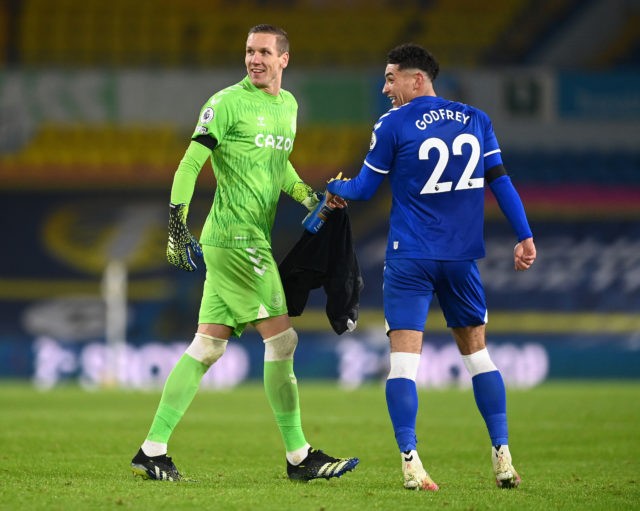 Everton won 2-1 against Leeds United in the Premier League on Wednesday night at Elland Road.

The Times journalist Henry Winter also praised Godfrey heavily on Twitter, saying the 23-year-old looked assured at the back alongside Yerry Mina.

Godfrey joined from Norwich City in the summer transfer window for a fee in the region of £25 million and has done well so far under Carlo Ancelotti.

Earlier this season, Godfrey was used out of his position in the left-back role when Lucas Digne got injured. He did very well, showcasing his versatility.

Ferdinand responded to Winter’s tweet, making a bold claim that Godfrey is a top-tier U23 defender in Europe.

Top tier u23 defender in Europe

Godfrey is a talented centre-back, no doubt, but is he a top-tier defender in Europe?

He is a pacey defender who is good at tackling and passing. The best thing about him is his anticipation – he reads the game very well. Everton have a real gem on their hands, and he has got a massive future.

However, Ferdinand has made a big claim here. Godfrey is probably one of the best (at his age) defenders in his position in the Premier League alongside Wesley Fofana or Tosin Adarabioyo, but there are some outstanding top-class defenders out there in Europe who are probably a lot better than him.

The likes of Dayot Upamecano, Ozan Kabak, Sven Botman, Alphonso Davies and Matthijs de Ligt are some of the world’s finest young talents at the moment and doubts remain about whether Godfrey can be named in the same breath.