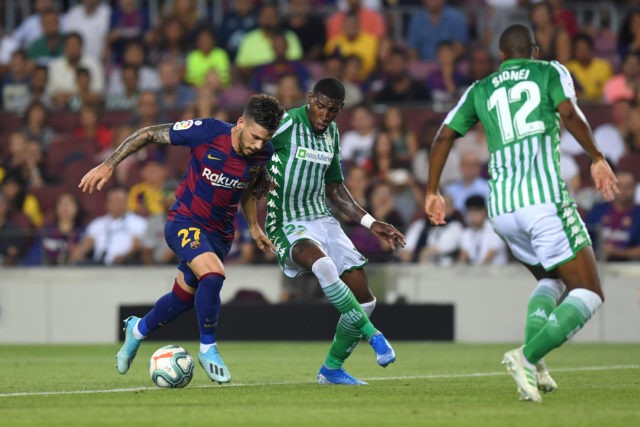 The report claims that Tottenham Hotspur, Everton, West Ham, and Newcastle United have all initiated contact with Barcelona over signing the defender.

The 21-year-old is a highly-rated youngster but Barcelona are not entirely convinced with him. He has spent the last 18 months on loan at Real Betis where he impressed. He managed 31 appearances in all competitions for the La Liga outfit, but Barcelona feel that he is not yet ready to play for the senior side.

He is yet to make a senior outing for the club, and the Catalan giants could either send him on loan or sell him permanently. All the four aforementioned clubs have initiated talks with Barcelona over a move for the player they value at £17.5m.

Tottenham desperately need to sign a right-back this summer. Serge Aurier has played regularly under Jose Mourinho but he has been largely inconsistent with his performances. Kyle Walker-Peters could leave the club as well, and Emerson could be a smart addition for them.

Newcastle may want to replace either of Emil Krafth or DeAndre Yedlin if the new owners come in. According to the Mirror, the would-be owners are ready to spend £200m on recruitment and infrastructure which means they will have money to spend.