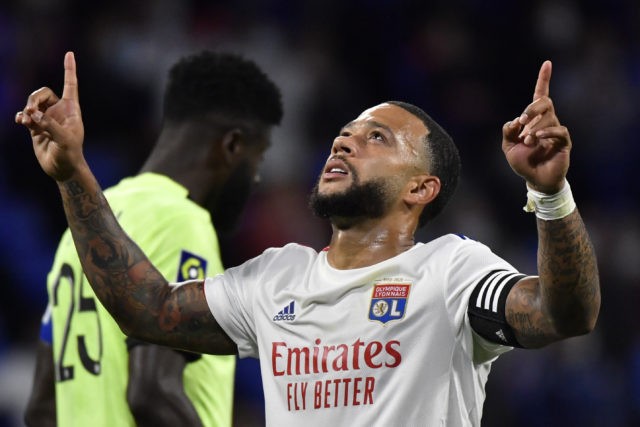 Everton are reportedly interested in signing former Manchester United winger Memphis Depay this summer, according to reports from The Sun.

The 26-year-old has taken his game to a whole new level since moving to Lyon from Manchester United in 2017.

The Dutchman was integral in Lyon’s charge to last season’s Champions League semi-final and he is being chased by Everton and Barcelona.

The 26-year-old scored 15 goals and provided two assists from 22 games for the Ligue 1 side in all competitions last season.

He has started the new season with a bang, netting a hat-trick in Lyon’s 4-1 thrashing of Dijon yesterday.

However, the winger has said that he is not sure whether he will complete the season with the Ligue 1 side.

Depay said, as quoted by The Sun: “I do not see the future, I do not know if I will do the full season here.

“I have been here for four years, I became captain.

“After you have to look at your career, there is no Champions League. At the moment I don’t know.”

The report claims that La Liga giants Barcelona are heavily interested in signing him, and are planning a £36 million move for the Dutchman.

New manager Ronald Koeman wants to replace Luis Suarez and has earmarked Depay as a potential option to fill his void.

Lyon could sell some of their key players this summer including Depay, Houssem Aouar and Moussa Dembele. It remains to be seen whether Everton can match that offer, and lure him to make a switch to Goodison Park.

Everton, however, won’t be able to offer him Champions League football which he desperately wants. Nevertheless, The Sun claims that the Toffees are eyeing a move for him this summer.

The Toffees have reportedly agreed a deal to sign Allan from Napoli, while they are in talks to sign James Rodriguez from Real Madrid.