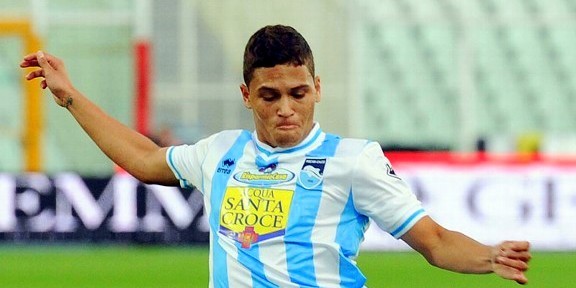 Manchester United target Juan Fernando Quintero has said that he would prefer a move to Inter Milan but his ambitions will not let him turn the big clubs down.

Quintero is one of the most coveted youngsters in Europe at the moment. The Columbian international has drawn interest from Juventus, PSG, Internazionale and Manchester United with his performances for the Serie A club Pescara.

The 20-year-old has a sweet left-foot and plays in the center of the park. He is adaptable to both offensive and defensive roles in the midfield and his known for his excellent ball control and dribbling abilities.

Manchester United has scouted Quintero lately and were reportedly lining up a bid for the Pescara youngster. But the midfielder has now revealed his desire to join Inter. Quintero was quoted in Gazzetta dello Sport:

“United? No, I like Inter. I prefer the Nerazzurri because they have a lot of South Americans at the club. And I’m happy in Italy.

“Saying that, it is clear that I would not turn down other strong teams because I’m ambitious: Manchester, Milan, Juventus…

“I’ll decide with my family and with my agent.

“I don’t know if I am worth that. I still need to learn and work hard. I need to improve as a player.”

Pescara is said to value Quintero at €10 million. The youngster has already earned his first senior cap for the national team and is the main focal point in the Columbian U-20 set up.