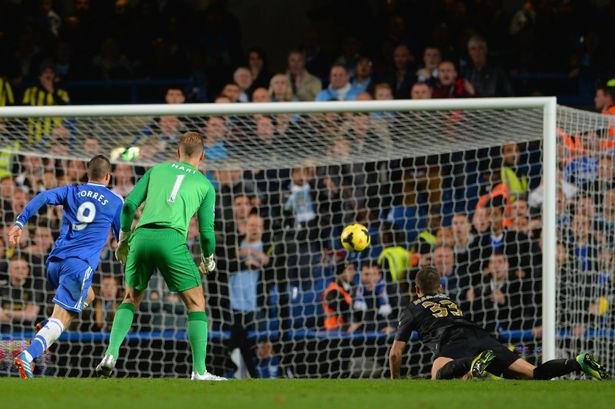 As 90 minutes ticked over at Stamford Bridge on Sunday, both Chelsea and Manchester City seemed destined to share the spoils. But then suddenly – and not for the first time this season – the City defence was thrown into disarray with a moment of miscommunication and panic, allowing Fernando Torres to steal in and snatch the points for Jose Mourinho’s side.

It is a problem which has led to Manuel Pellegrini’s side to lose three of their opening nine games in the 2013/14 Premier League campaign. It leaves the Citizens sitting in 7th spot in the table, two points ahead of their bitter rivals United, but more critically six points adrift of leaders Arsenal. It is a status which leaves their Premier League title aspirations in jeopardy as we are yet to enter the fourth month of the season.

City’s back line have experienced communication issues,  but there is a more intrinsic defensive issue. With Vincent Kompany they have a captain; a leader; a guardian who will suffer for the shirt. Without him, they are defensively lacking leadership, often with a line that feels makeshift – at best.

To begin with, Manuel Pellegrini continues to stick with a Javi Garcia as a real option as a centre back. For two reasons this is a problem. At 6’1 Garcia lacks the aerial ability that most defenders have and two the former Real Madrid youth product is a ball-playing central midfielder. Having a Yaya Toure a Fernandinho and a Javi Garcia does simply not accommodate itself, so is Pellegrini finding a way of using all three in at once ala Gerrard and Lampard for England? If so it is a mistake.

That is not to say however, that Garcia as a centre back should not work, but next to the naive Matija Nastasic is clearly does not. The Serbian international Nastasic has partnered Garcia in four games this term and in all but one game City have failed to keep a clean sheet, in large part to a mistake from one or the other. In the last five games Nastasic has started as first choice centre back in the absence of the Belgian Kompany, City have a grand total of zero clean sheets. Even the reliable Pablo Zabaleta is not faultless, certainly in the 3-2 defeat at Cardiff. 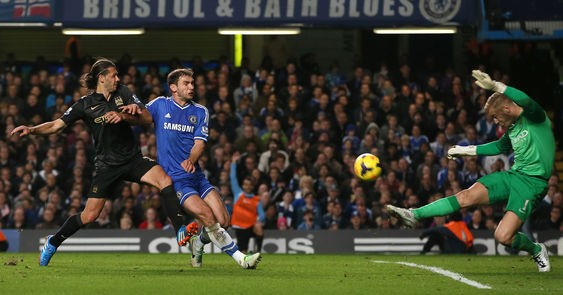 The other option the Citizens have lie with 32 year old Argentine Martin Demichelis. Though experienced (seven years at Bayern including two German doubles) the defenders’ best days are behind him and as Sunday showed the Argentine will likely struggle to adapt to the pace and physicality of the Premier League. Demichelis is a former charge of Pellegrini whilst at Malaga and even though he arrived on a free is a move that will raise skepticism given his performance – although a baptism of fire – at Stamford Bridge. Most curiously Demichelis moved to Atletico in the summer before Manchester, without making a single appearance for Diego Simeone.

Manchester City’s problem at left back raises queries also. To begin the season Gael Clichy started in the role, but after the defeat in Wales, Serb Aleksandar Kolarov was installed for the next five games before again being replaced by the French international. That is perhaps no surprise given the Roberto Mancini regime and would be acceptable if City were winning but that is not the case. Every team needs full back consistency and quite clearly the Citizens do not have this.

It may well have to do with the nervousness of one Joe Hart. The England goalkeeper has come under fire recently for his poor shot stopping – particularly in the Champions League – and had recovered to so extent. However that shakiness reared its ugly head for the Shrewsbury man as he and Nastasic failed to read each other on Sunday. A defender needs the confidence of his goalkeeper; without it, doubts will creep in and it appears have done so.

On Monday, Pellegrini began to formulate a plan to drop the un-performing Hart for Romanian Costel Pantilimon, but his number 2 is without a Premier League appearance to his name and that would represent a huge gamble. However having stated at St James’ Park on Wednesday night in place of the beleaguered Hart, Pellegrini may well opt to give the Romanian a shot.

Pellegrini’s doubts over his main man between the sticks arose after the Bayern Munich game and the Chilean pondered dropping Hart for the Everton game, when he told the BBC:

“It wasn’t a simple decision [to play Hart]. It was a very difficult decision. But I think Joe needs the trust of all us, from me, the other players, the fans. He is mentally strong. I spoke long with him after the match against Bayern Munich. It was not an easy decision because I was not sure how he would react.”

“Of course, he feels he didn’t do well and was guilty, but he showed how strong his character is. But after talking with him I felt he had the character to play [today] and I am very happy for him.”

Whether or not the City boss elects to drop Hart or not, with the blue half on Manchester having lost three games already, for their title chances to remain on track it is critical they stay unbeaten for the remainder of 2013. City’s defence also have to keep up their end of the bargain, but with games to come at the Etihad versus Spurs, Arsenal and Liverpool and away days at Southampton and West Brom before the calendar year is out, that is easier said than done.