Manchester United’s long unbeaten run came to an end last weekend when they were beaten 1-0 at home by Southampton without forcing a single save out of Fraser Forster.

Queens Park Rangers are without a win in their last five matches in all competitions but are unbeaten in their last seven Premier League games at Loftus Road, drawing their last two.

Louis van Gaal’s side have drawn their last three games on the road and are unbeaten in their last five away from Old Trafford. United thrashed QPR 4-0 at Old Trafford back in September – their only win in their opening five Premier League matches.

Harry Redknapp has been without left-back Suk-young Yun for the past four league games and is not expected to recover from his ankle injury.

Rio Ferdinand is a doubt with a calf injury and has only played one of QPR’s last 14 Premier League matches. Looks like the former Manchester United player will be a substitute at best on Saturday.

Sandro has been out with a knee injury since November and is a few weeks away from returning to training, Alejandro Faurlín is out for the season with an anterior cruciate ligament injury.

Marcos Rojo is 50/50 to return from his thigh injury, we guess he’ll be saved for either the trip to Cambridge United in the FA Cup next Friday or rested for a fortnight until the end of the month.

Robin van Persie picked up an ankle injury last weekend and looks likely to miss out this weekend. Ashley Young is still sidelined but Louis van Gaal has most of his players available to him for a rare occasion this season. 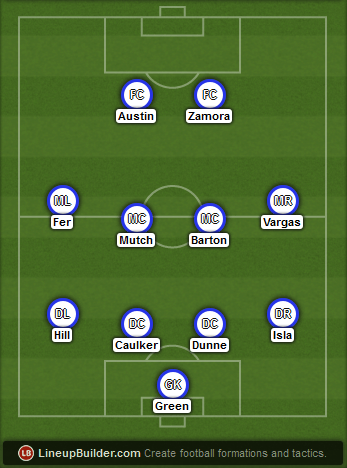 This is a similar lineup and formation to the QPR side that drew 2-2 at home to Manchester City at the start of November, with only Sandro and Suk-young Yun missing tomorrow through injury. 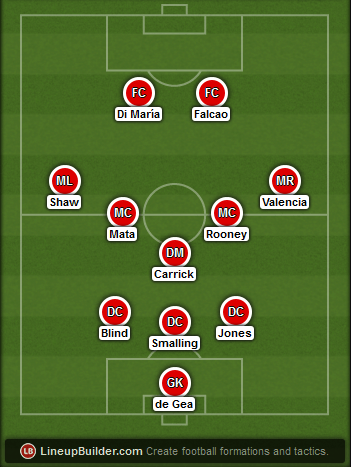 Louis van Gaal is having success with this formation. With Robin van Persie out injured, we think it will be Radamel Falcao partnered with Ángel Di María nearby. The Argentine doesn’t have a position on the left wing with Luke Shaw playing left wingback and both Wayne Rooney and Juan Mata can start in the centre of midfield with United expected to dominate possession and take the game to the hosts.

Ángel Di María vs Richard Dunne
Queens Park Rangers’ slow and old centre-back faces one of the toughest matches of his life on Saturday when Britain’s most expensive signing comes up against him. Ángel Di María didn’t look fully fit last weekend but if he’s anywhere near his best tomorrow we’d expect him to rip Richard Dunne and QPRs defence apart. He’ll also create chances for his partner up front.

Wayne Rooney vs Joey Barton
Wayne Rooney has gone a couple of games without a goal and was ineffective versus Southampton’s midfield that put in an awesome performance at Old Trafford last weekend. QPR don’t really have the talent to put in a similar performance this weekend so expect Rooney to have a big game in the middle of the pitch in this one.

Radamel Falcao vs Steven Caulker
Radamel Falcao was rested last weekend so should be fresh for this one. His movement and eye for goal should guarantee him at least one goal in this match when he faces the Premier League’s worst defence. Steven Caulker and Richard Dunne are in for a long day versus the talented Manchester United attack.