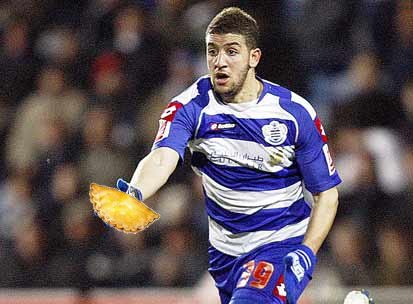 Newly-promoted Queens Park Rangers are still no closer to holding their end of season promotion party, after it emerged that the FA are investigating reports that the R’s have hired a questionable third-party caterer for their Harlington bash. According to paperwork, chairman Bernie Ecclestone employed relatively unknown Argentinean caterers Alejandro’s almost two years in advance; an arrangement that the FA have, apparently, been looking at intensely since September.

If reports are to be believed, the London club paid a mysterious middle man in the deal, rather than going directly to the catering business themselves, which is, since the start of this season, an act that breaches the FA’s Third Party Catering rules. Said rules clearly state, under regulation 31.6, that: “Payment for all forms of sustenance must go directly to the chef, caterer or Greggs employee.” If the FA find QPR to be in breach of the rules, which is a very real possibility, the club may find its canteen docked a number of carbohydrates and proteins.

Reaction to the prospective punishment was mixed at Loftus Road. Paddy Kenny was unruffled by the news, stating: “Look, there’s a corner shop four minutes down the road. I couldn’t care about carbonara. It’s when they try to take my Mars bars…then we’ll be having words.” The staff at Harlington Sports Centre were naturally more worried, with some fearing not only for the squad’s physical condition, but also their own jobs. “If choices in the canteen are restricted, the players will look elsewhere. All I have is this job; I can’t afford to lose it”lamented head chef Lee Cook.

R’s manager and pastry aficionado Neil Warnock was defiant in the face of impending retribution. “We’ve done nothing wrong. All we’ve done is tried to introduce a bit of international flair to the side. It’s not as easy to bring in empanadas as it is to bring in Cornish pasties, they have different ways of doing it in Argentina.” Warnock said that the players and staff would look to celebrate in the next twenty-four hours, regardless of the verdict. “We deserve to stuff our faces, so we will do so. If needs be, we’ll bring in packed lunches.”

UPDATE: The FA have found QPR guilty of two charges relating to third party caterer payments, and have fined the club £875,000’s worth of serviettes and paper plates. Warnock was delighted, but unavailable for comment, having wrapped his face around a chicken-filled South American pastry.