The Premier League has changed for the better, despite the poor showing in Europe.

There has been much debate recently about the performances of Premier League sides in the Champions League, and what that signifies for the league’s overall quality compared with the rest of Europe. The start in the Champions League has been a sluggish one, and mirrors prior years where English teams have been failing to impact the tournament in the way we were accustomed to a few years ago. But the impact on the domestic league has been inadvertently positive.

As a result of the underwhelming representation in the Champions League in recent years, the ‘top 4’ might become a top 3. The Premier League is entitled to 4 places based on Uefa’s coefficient calculations which awards points based on games won in Europe. The

points awarded for wins increase based on the importance of the game; group games score less, whilst quarter finals and semi-finals yield more. But Uefa could take a Champions League place away if things don’t improve.

The season so far has produced one of the most unpredictable starts in Premier League history, and there is good reason for that. The teams at the top are inconsistent and this has closed the gap in quality between top and bottom. The trend towards this has been growing in recent years, as the gap continues to close between the top and the rest.

Between 2005 and 2009 the gap between a top 2 or top 3 and the rest of the league was often 15 points. The teams at the top were a cut above the rest, and made easy work of beating teams below them, to the extent that games were a lot more predictable.

Since then, promoted clubs in particular have fared better. Between 2008/2009 and 2013/2014, no more than 1 promoted team was relegated. Before that time, it was often 2, and this doesn’t factor in the impact of yoyo-teams, such as Birmingham and West Brom, who would consistently failed to establish themselves as Premier League clubs. It is the latter that has become more of a rarity, with teams such as Southampton, Swansea and Stoke becoming established long term Premier League teams.

The top 4 was also a more permanent group during the noughties, almost always made up of Manchester United, Arsenal, Chelsea and Liverpool. In the last few years, although not drastically changing from year to year, the final standings are less of a forgone conclusion.

All down to money? 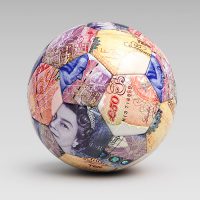 As the money received from the Champions League has become less of a separator, the division between 4th and the rest of the Premier League has been ironed out. Champions League money may have doubled a club’s intake from competitions 10 years ago, but the share is now less significant, resulting in a more equal monetary playing field.

As other Premier League teams have seen their income grow, they have been able to compete more effectively on wages and transfers. This has impacted favourably on their ability to compete with the teams at the top, particularly when those teams are failing to attract world class talent.

The most competitive league in the world?

There is no doubt that the Premier League is starting to lose out on world class players, and this is having an impact on the ability of clubs to compete in Europe. But closer to home, Premier League matches are becoming more intriguing. La Liga may boast two of the best teams in Europe, but the rest of the league cannot get close to them.

10 years ago, results in the Premier League were far more predictable, and the most interesting part of a season was often the relegation scrap. Now there’s a new tip for the title each week.