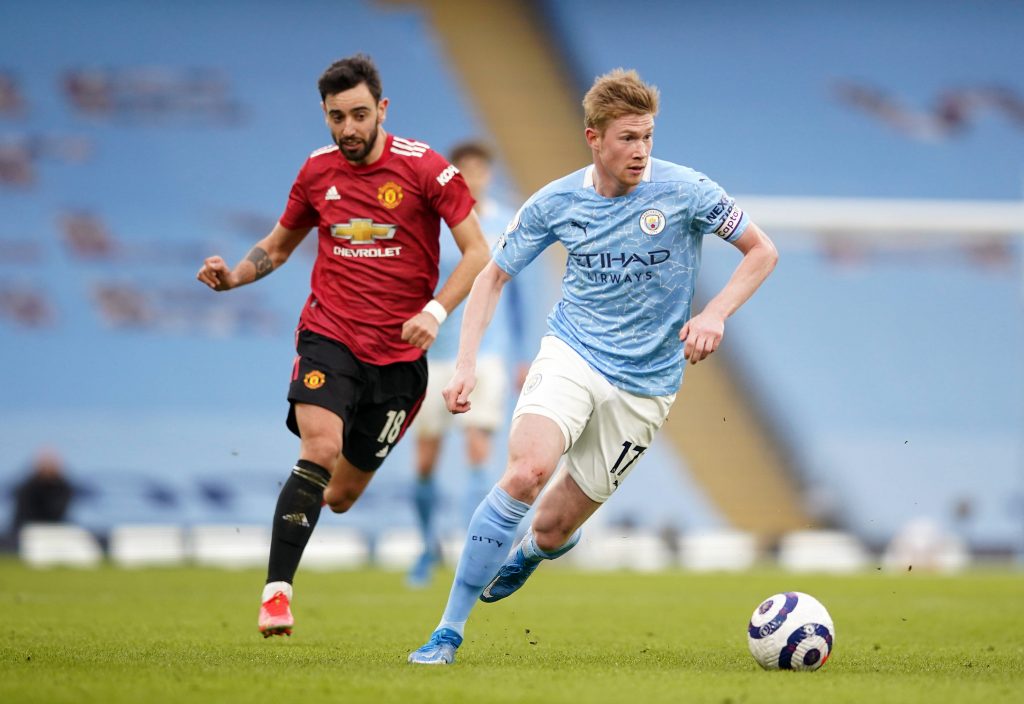 The six nominees for the PFA Players’ Player of the Year have been announced.

The winner is voted for by fellow professionals, based on who has had the best year in English football.

Manchester City dominate the shortlist, boasting four of the six candidates. This is unsurprising, given that they comfortably won the league. Manchester United and Tottenham Hotspur are both also represented.

This is separate from the Premier League Player of the Season award, although the same player has scooped both prizes in seven of the last eight seasons.

Having won the award last season, De Bruyne is back for a second go. If he collects the trophy again this year, he will become only the third player in history to win it back-to-back, after Thierry Henry (02/03 and 03/04) and Cristiano Ronaldo (06/07 and 07/08).

Despite missing several games through injury, the Belgian has still produced some brilliant performances, scoring six and assisting 12 in the league.

Dias arrived at Man City from Benfica this summer for a club-record fee as somewhat of an unknown quantity. However, it wasn’t long before the Portuguese established himself as one of the best defenders in the league.

The 24-year-old has been hailed as the main reason why the Cityzens have managed to regain top spot, standing out in a backline that conceded the fewest goals and kept the most clean sheets. Dias is probably the frontrunner for the award as things stand.

Fernandes’ first six months at Old Trafford were excellent, and he has shown no signs of slowing down in the following year.

The playmaker has been the star man for the Red Devils this season, registering 18 goals and 12 assists in the league. This puts him in the top three in both charts.

Foden had to be patient to get his opportunity at the Etihad, but once he broke in, he hasn’t looked back.

The youngster has scored on nine occasions this term and has also recorded a further five assists. This includes stellar displays in away games against Chelsea and Liverpool.

However, he has played just 1614 out of a possible 3420 league minutes this season. This could hinder his chances of winning the award.

The fourth and final Man City player on the shortlist is Germany international Ilkay Gundogan.

For most of the season, Pep Guardiola has opted not to field a striker. Many wondered where the goals would come from, but Gundogan has stepped up.

The former Borussia Dortmund man hit 13 goals for the champions – more than double his next best tally in a single season.

His strikes helped him win the Player of the Month award twice.

Tottenham started the season in brilliant form, and Kane was a key part of it. But while the Lilywhites’ form fell off, the striker continued to produce.

The England captain’s goalscoring has never been in doubt, so it came as no surprise when he won the Golden Boot for the third time.

One aspect of his game that really came to the fore, however, was his playmaking, accumulating 14 assists – more than any other player.

This season, Kane became only the third player in Premier League history to finish top of the goals AND assists charts, after Andy Cole (93/94) and Jimmy Floyd Hasselbaink (98/99).