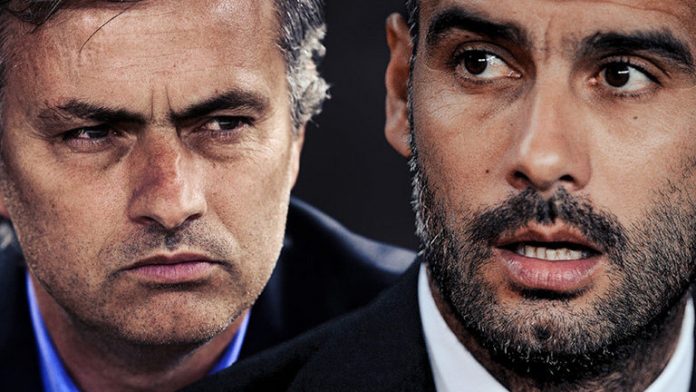 Manchester City will be looking to get back to winning ways when they host Manchester United this weekend.

Jose Mourinho will look to delay Guardiola’s title party for another week and the home side will be hoping to bounce back with a statement win.

Manchester City were beaten 3-0 by Liverpool in their last game and the home fans will be expecting a reaction here.

The Premier League leaders have been unplayable at home all season and United will have to be at their best just to avoid a defeat.

The Old Trafford outfit are likely to sit deep and hit the hosts on the break but City’s quality could be too much for them this weekend.

Manchester City will be motivated after the shambolic result against Liverpool and they will look to break United down here.

Sky Sports pundit Paul Merson believes that the hosts are likely to edge this one and lift the title this weekend.

He said: “I expect Man City to win. If you could say to Man United a 0-0 draw, I think they’d chop your arm off. I think United will turn up and play for a 0-0, but I just don’t see City not breaking them down before 90 minutes is up. United won’t play the way Liverpool play, they haven’t got the legs to do that all around the pitch. City’s confidence will be shot. They will have lost a lot of confidence from that Liverpool loss – no shot on target in 90 minutes, the way they’ve been playing. The only team that can upset City are Liverpool, because they’re the only side that plays that way against City. I think other teams are scared, they go into games against City and show too much respect, but Liverpool’s success starts from the front three – they’ve got pace and close down properly.”

Merson went on to predict a 1-0 win for Manchester City.