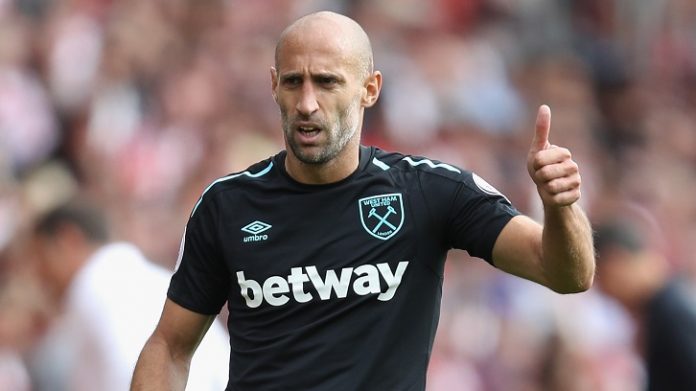 West Ham defender Pablo Zabaleta has showered praise on Grady Diangana who made a strong impression during the Hammers’ 4-2 win against Burnley on Saturday.

The 20-year-old has made an eye-catching impact. The veteran Premier League star Zabaleta is thrilled with the youngster’s potential.

He impressed as a substitute against Spurs, and as a starter against Leicester. However, he produced his best performance till date last week at the London Stadium, where he managed an assist for Felipe Anderson.

Zabaleta has said that Diangana is ‘very dangerous’ to play against, especially during one and one situation.

“Grady seems to be looking very dangerous, especially when he is in one-on-one situations,” said Zabaleta to the club’s official website.

“He’s not scared and he shows personality to ask for the ball and to take people on and he looks very dangerous.

“Especially with the injury to Andriy Yarmolenko, the manager gave him a chance and he took it and he is showing that he wants to keep a place in the team, in the starting XI.

“As with all the young players, we need to make sure we give him the confidence. I’m playing behind him so I’m trying to keep talking to him all the time, telling him ‘no worries, next time’ if he loses the ball and giving him confidence.

“He looks very dangerous going forward and he will always produce something, whether it be a good pass or a dribble.”

The former Manchester City defender is absolutely spot on with his assessment.

West Ham suffered a massive blow last month after Andriy Yarmolenko was ruled out for the rest of the season.

Manuel Pellegrini has put his trust on the young Diangana, and he has grabbed the opportunity with both hands. He is an exciting young talent, and always gives the impression that he can produce moments of brilliance.