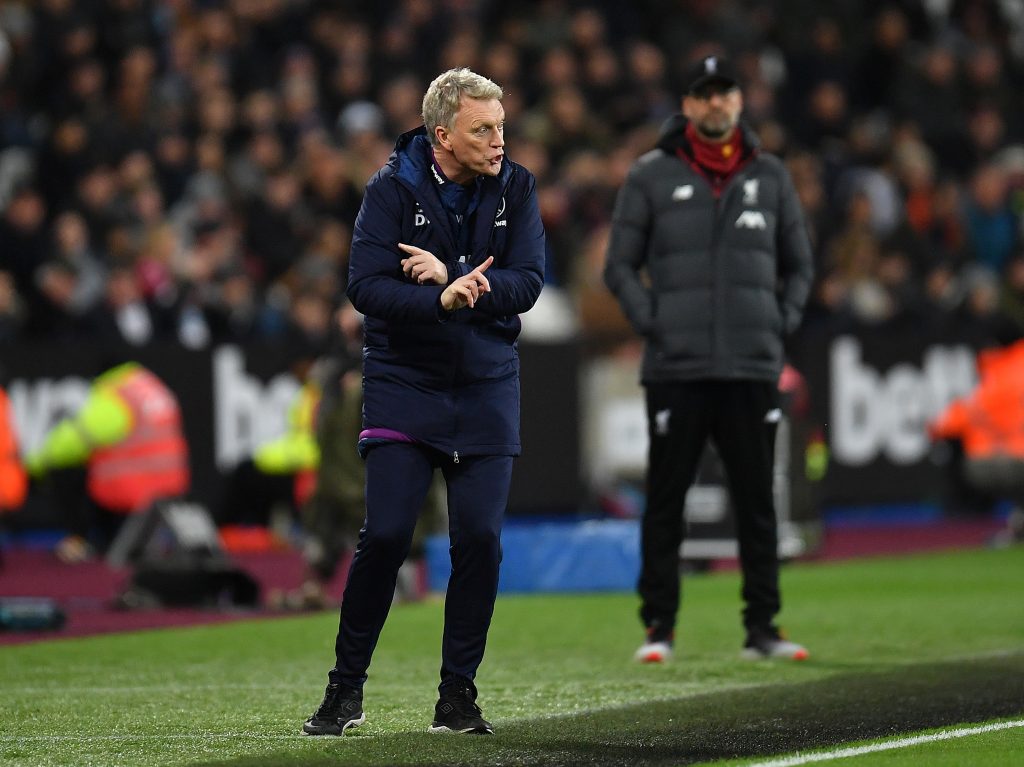 Liverpool host West Ham United tonight and will look to make it 54 league games without a loss at Anfield.

The Reds’ last defeat at home came at the hands of Crystal Palace in April 2017, with Sam Allardyce leading them to a 2-1 victory.

David Moyes can lead the Hammers to an unlikely victory at Anfield tonight by taking a leaf out of Big Sam’s book, but it definitely won’t come easy.

Liverpool are without a league defeat this term and have drawn just once, establishing a 19-point lead at the top of the table as they run away with the EPL title, while West Ham come into this game on the back of six wins and 14 defeats.

They weren’t this impressive the last time they lost at Anfield, but they still play the same 4-3-3 formation and style of football.

Allardyce told talkSPORT how he orchestrated that famous Palace victory, and West Ham boss could learn a thing or two ahead of tonight’s game.

“It’s one of the big saviours. Those three points helped us stay away from relegation. it was a remarkable result, and nobody expected it. It was borne out of the fact that it’s possible to go to Anfield and play out from the back because they are such a high-pressing side with Jurgen Klopp and are so good at it. They are as good as anybody in defending from the front in Europe,” Big Sam said on talkSPORT this morning.

“We had Christian Benteke who is 6ft 3, and played off him. We made provision for Yohan Cabaye just to sit off Christian and run the channels because Liverpool’s full-backs at Anfield bomb forward and the two centre-halves are left with a lot of spaces down the left and the right and that’s where the first goal came.

“When you get a set-piece don’t waste it, when you get limited possession against Liverpool, you’ve to maximize it. We mastered the opposition very very well. The way to play forward is to contain the opposition and stop them from scoring because they are one of the best teams. And if you don’t stop the goals from going in at Anfield, you’re not going to get a result.”

“If you get a set-piece don’t waste it.”

“People say we were lucky but we mastered the opposition very well.”

“Having good possession & losing 4-0 is not the way forward.”

Sam Allardyce is the last boss to get an away league win at #LFC! Eyes

Here he explains how he did it… pic.twitter.com/4JnjBPJCZX

While he hasn’t been impressive of recent, Sebastien Haller would be the best option to lead the line for the Hammers tonight.

At 6ft 3, the Frenchman will fancy his battle against the 6ft 4 Virgil Van Dijk.

Michail Antonio can cause the Liverpool full-backs problems with his speed and strength, and the midfield trio of Mark Noble, Declan Rice, Tomas Soucek are capable of holding their own against their Reds’ counterpart.

West Ham will most likely name a back-five, and it will be interesting to see if they will be enough to stop the hosts from scoring.

Moyes’ men have won just one league game this year, and not many will tip them to leave Anfield with even a point.

However, bagging all three points isn’t 100% out of their reach, and it will be interesting to see how they fare.