Last Chance for the England Chieftains?

At one point Terry, Lampard, Gerrard and now Ferdinand have all held the captaincy yet all four are likely playing their last World Cup ever. Will this incite a mid-life-crisis-esque meltdown or provide swan song cup winning motivation?

It struck me as I was glancing through this England team sheet on the Guardian website. Look at the ages. Lampard is 31! When the hell did THAT happen? It seems like only yesterday he was runner up to Ronaldinho for the Ballon Do’r and FIFA World Player of the Year – I was all giddy like a mum watching her son in a crap play.

See, I’d followed Frank since his West Ham days (despite being a Chelsea fan) and to his England debut in October 1999. Happy days! Do you know he’s a David Cameron fan? True, probably. In fact, it was 5 years ago that Frank was runner-up and whilst he’s still in great shape after his best ever season, he joins a whole host of players who – after closer inspection – are almost certainly playing their last ever World Cup. Ever. EVER! That’s a big deal.

This wouldn’t be such a huge and vastly underestimated topic if so many key players weren’t in the 2006 squad. Look:

Bar Barry, that’s our ENTIRE first team who will be taking to the field for a consecutive World Cup.

What is the normal age for retiring from national duty? 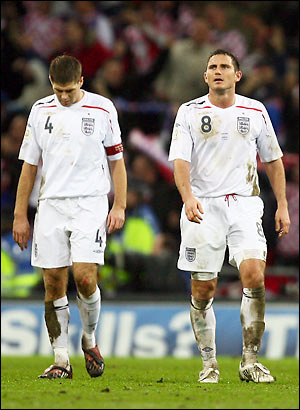 32. Our oldest outfield player, Jamie Carragher, is technically out the door after this. Oh and what’s this… surprise surprise he agreed to un-retire! Crashing the party late. If Glen Johnson weren’t so defensively inept I’d be well narked.

Okay, so if we imagine this 32 is a rule – as if we all live in Logan’s Run – who from our current squad will remain?

Add to that, the liklihood that Hargreaves at 33, Bridge at 33 and Owen at 34 would probably be overlooked. Even Beckham at 39 would surely miss out… surely?

Nevertheless, put yourself in Lampard and Gerrard’s shoes and you’re thinking “Crap. We better make this work now. For like, the 4th tournament’s time of asking!” This is it. This is LITERALLY the end of the World Cup road for them two, as well as our centre back pairing of Terry and Ferdinand. Epic isn’t it? That’s the spine of the England team since Euro 2004. Ponder for a moment that this could be the last time we have a team THIS good for years.

What can we draw from that?

OK. So we can do two things.

1. Panic. This is literally our Golden Generation. It’s not a punch of under-achieving sock puppets like last time around. After this, it’s – by all rights – down hill. We’ve got more experienced winners than we have in the last 20 years.

2. And this is the big one – rejoice! – our boys are going to go hell for leather. It’s their last chance to banish the ghost of 1966. That huge (and frankly annoying) albatross of a spectre. I love that we won it, but god, I just die when they replay the Geoff Hurst goal before each match. It is over now. Shut up.

Our lads are going to be so up for it. Not just out of patriotic desire but out of sheer panic. The end of their World Cup lives is nigh. For James, Green, Warnock, Cole, Terry, King, Ferdinand, Upson, Carragher, Gerrard, Lampard, Barry, Joe Cole, Crouch and Heskey it’s the last World Cup they’ll ever play in. By the 32 rule, it’s also the last national tournament for Lampard, Ferdinand, Heskey, Upson and James too!

When they’ve bowed out flimsily, you could argue they’ve been easy to console. “Don’t worry JT, Stevie G, next time we’ll get em sonny jims lads by gum!“. There’s no next time now.

My money is on them to come good. Purely for the reason that this is England’s peak. Despite having a ropey right back in Glen Johnson, we’re great all over the pitch. If there were ever pressure to succeed, it’s now because for the entire first team except for Rooney – this is the last chance to fulfill potential. I know that’s a ill-founded reason for optimism but… I’m an England fan by god, it comes with the territory. Come on you sods!