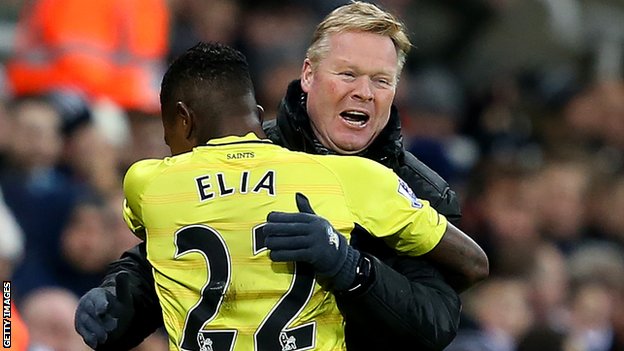 In a tale of two deflections it was high-flying Southampton who came out of a tight encounter with the three points. No at their fluent best, the Saints were fatigued perhaps by their midweek FA Cup clash with Ipswich. However the third-placed side went ahead after less than a quarter of an hour when Eljero Elia, on-loan from Werder Bremen, put Southampton ahead. A perfectly weighted pass through the middle by 20-year-old James Ward-Prowse still left Elia with a lot to do. The Dutchman was able to get a shot away though and the ball found it’s way past Tim Krul in the Newcastle goal.

The Saints may have hoped to sit back after that goal but such hopes were vanquished by Newcastle who struck back on 29 minutes. There was more than an element of fortune about Yoan Gouffran’s goal. Floran Gardos slid in well but the ball struck Gouffran’s leg and flew past Fraser Forster who was powerless to do anything about the unlikely goal. There was little to separate the sides in truth and Newcastle actually enjoyed the lions share of the ball, ending the game with 58% possession. Despite edging the possession, they created little. Newcastle’s best chances coming from set pieces and balls into the box.

James Ward-Prowse, the latest success story of the St Mary’s conveyor belt, continued his impressive development as a footballer in this, his sixtieth appearance for the side at the age of twenty. Creating the first and passing well throughout, the youngster stood out. Newcastle will consider themselves unfortunate to have taken no points from the game and in many respects they have a right to. Eljero Elia scored his and Southampton’s second after 62 minutes, again in fortunate fashion as the ball was deflected past the onlooking Tim Krul. Controversy came in injury time where the ball struck Jose Fonte’s hand at pace. The referee adjudged that there was no intention from the Southampton man, much to the frustration of the Newcastle players. Southampton in their hunt for the top four will point to the fact that they were without midfield duo Morgan Schneiderlin and Victor Wanyama through injury and still battled to victory.

It is often remarked that winning when not at your best is the hallmark of a top team and today was another indication of the meteoric rise of the south coast outfit. Five points clear of fifth placed Tottenham, if Manchester United are still in the chase for the title then so too are the Saints. Newcastle meanwhile are still looking for their first victory in this calendar year and John Carver is likely to be ruing his luck. In his pursuit of the top job at St James’ Park the results do not bode well for Carver despite playing well in the games in which he’s taken control of the side.