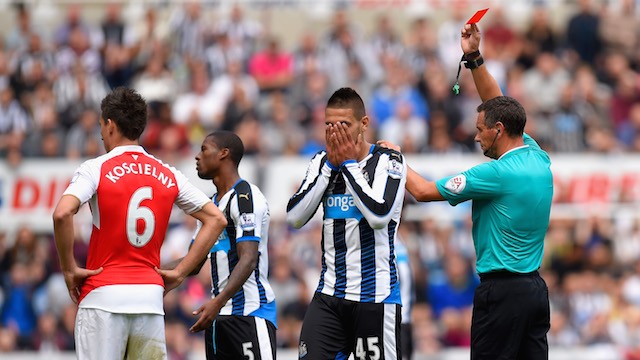 The Football Association has charged Newcastle United forward Aleksandar Mitrovic for violent conduct in the Magpies’ game against West Ham United on Saturday.

Newcastle comfortably beat West Ham 3-0 in the Premier League showdown. But in the 80th minute, Mitrovic appeared to catch Hammers midfielder Manuel Lanzini with an elbow. This led to retrospective investigation by the FA who have released a statement confirming the charges.

Neither referee Neil Swarbrik nor the linesmen noticed the incident but television replays clearly indicate a scuffle between the two players.

“The Newcastle United forward was involved in an incident with West Ham United’s Manuel Lanzini in the 80th minute of the game on Saturday. He has until 6pm on 30 August 2017 to respond to the charge,” read the FA statement.

Three former referees will study and examine the incident before suggesting an appropriate punishment for Mitrovic. The Serbia international could face a three game ban if found guilty of the crime. The 22-year-old could miss the games against Stoke City, Brighton & Hove Albion and Liverpool.

Signed from Anderlecht for £14.5 million in 2015, Mitrovic was linked with a move to Partizan Belgrade this summer.