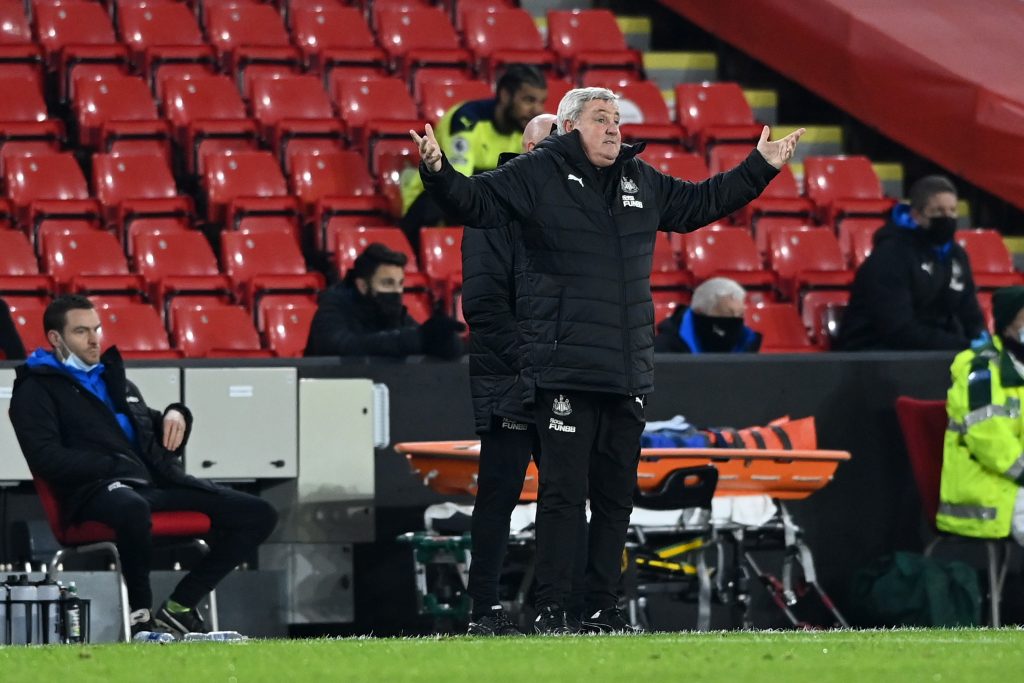 Newcastle United’s dismal 3-0 defeat at Arsenal on Monday evening extended their winless run to nine games and cranked up the pressure on manager Steve Bruce.

The result left the Magpies 15th in the Premier League, seven points above Fulham who have a game in hand in the final relegation place.

The defeat was the final straw for supporters’ group Toon for Change, who demanded the immediate removal of Bruce as manager after the game.

“Steve Bruce described the Newcastle United manager role as his dream job, but under his leadership – this season is becoming a nightmare for supporters,” Toon For Change’s Joe Chilcott told the Shields Gazette.

“We are told by pundits who defend Bruce that football is a ‘results business’, meanwhile we have won one of our last ten games and find ourselves seven points above the relegation zone.

“After the Sheffield United loss (which was their first win and clean sheet of the season), Bruce said that ‘he’ll never walk away from a challenge’, but if he really loves our club, he should realise that this is one challenge too many for him and it is time for him to step aside.

“Bruce has been relegated from the Premier League twice with two different sides and the way things are going, we will be his third.

“In the last 12 years, Newcastle United has been relegated twice – and, on both occasions, Mike Ashley stood by inept managers for too long before bringing in (Alan) Shearer and (Rafa) Benitez, respectively for thankless tasks.

Ashley should learn from his previous mistakes, get rid of Bruce and appoint a proven, progressive manager before it’s too late.”

It is impossible not to have sympathy with Newcastle fans at the moment, with the club once again in a downward spiral.

Bruce is understandably copping plenty of flak right now, but Toon for Change’s calls for him to be sacked actually highlight a much bigger issue.

The group calls for the appointment of a ‘proven, progressive manager before it’s too late’. In theory, it’s a great idea. In reality, it’s not going to happen.

A quick look at who bookmakers think will be the next Newcastle manager tell their own story.

Based on the criteria of ‘proven and progressive’, the field suddenly looks rather thin. And of those that are ‘proven’, why would they put themselves at Ashley’s mercy?

It’s a similar story for those that would be classed as ‘progressive’. From the list above, that probably describes Steve Cooper. Why would he leave Swansea City right now?

Ultimately, if Bruce were to be sacked, his eventual replacement would be on a hiding to nothing.

While the club is owned by Ashley, it will never be what Newcastle fans want it to be – that’s where the anger should be focused.

Sacking the manager is merely a sticking plaster over a gaping wound.