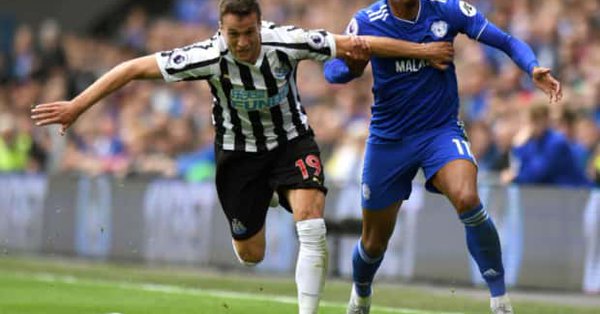 Newcastle United picked up their first point in the 2018-19 Premier League after they were held to a 0-0 draw against Cardiff City on Saturday.

Alan Shearer, the Newcastle legend and a popular football pundit, described the match as “terrible”, with both teams displaying a severe lack of quality.

Newcastle could have sealed the match in the end when they were awarded a penalty, but Kenedy missed from the spot for the visitors.

One player who has particularly disappointed is Javier Manquillo, and Newcastle fans weren’t impressed with his performance at all.

Manquillo yesterday proved why he is not a Premier League player, he got totally rinsed by a Championship winger ? #nufc

Very poor… Manquillo should be nowhere near the team… My point is this… There’s no movement or urgency from the two up top so the others look like bad performers…. There’s no one to hit or hold up, or link play…

In fairness to Manquillo. He’s just on work experience. He’s not actually a footballer

It worries me greatly that every time Dummet or Yedlin get injured we’ve got the hapless Manquillo coming in to take their place.

Honest to God, the lad is League 1 standard.

Manquillo must go! Somewhere else than St James Park!

The 24-year-old started the game after DeAndre Yedlin was ruled out of the clash. However, the Spaniard, who is on £35k-per-week wages was forced off against Cardiff with an ankle injury.

Manquillo went down clutching his ankle late towards the end of the first half, and was replaced by midfielder Issac Hayden, who was later sent off for a tackle on Josh Murphy.

Rafael Benitez said after the match that Manquillo’s injury is not serious. Yedlin is Benitez’s first choice, and most likely Manquillo will be dropped to the bench once he returns to action.