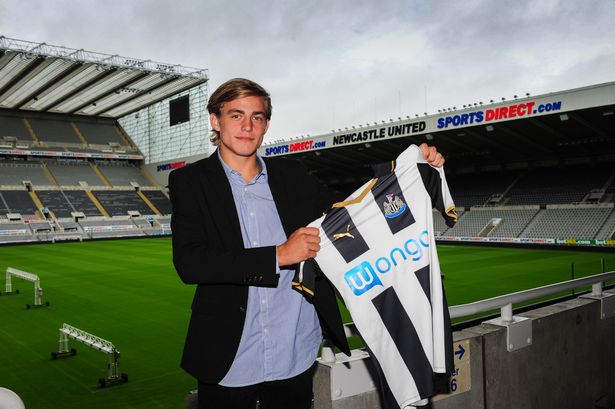 Majority of Newcastle United fans on social networking site Twitter feel that the time has come for Rafael Benitez to give young exciting talent Elias Sorensen a run in the senior side.

The Magpies find themselves at the bottom of the Premier League table, with just two points after nine games.

Rafael Benitez’s side have managed only six goals thus far, and it is one area that is causing big headache for the Spaniard. Summer signing Salomon Rondon is yet to open his scoring account, while the likes of Joselu and Ayoze Perez are hardly consistent.

The former Liverpool boss has insisted that he will only bring youngsters to the side when he feels the time is exactly right. Should he rethink his stance after Elias Sorensen scored a hat-trick against Aston Villa in Premier League 2 on Monday night?

The 19-year-old has been in red hot form this season, and has now hit 11 goals for the season. Many Newcastle fans believe that the youngster deserves a chance in the senior team after his latest performance.

Anything is better than watching Perez struggle, get him in there! #nufc

Ask @rafabenitezweb not us. He looks good, no brainer

You just know a 5m bid is going to come in for him in January from Chelsea , Liverpool or somewhere and you know what? Our beloved “owner” will accept it !! #NUFC

Must be a rhetorical question! Quite obvious we are DESPERATE and this lad is full of confidence which is 90% of the battle. But will Rafa takes what he sees as a risk?! 27 shots on Saturday and no goals! Yes FFS, get the lad in there!!

Yeahhhhh.. Come on bring him to 1st team.. We are desperate for goal..

In the first team now please

He can’t do any worse than our so called stars in the first team. Oh sorry I forgot our 100% home record…..played 5 lost 5…nothing more to add to that really!!

If this doesn’t send a message, I don’t know what does. #nufc https://t.co/mrTpMpMFii