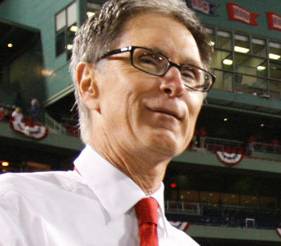 Do you remember Tom Hicks and George Gillett? The two rootin’-tootin’ American business men that almost single-handedly ploughed Liverpool FC into the terra firma by saddling the club with monstrous debts and elaborately convoluted payment plans? The pair of ruddy-faced barnacles that dug in their spurred-heels and hung on for dear life as the club slowly died on the vine, despite the fact that several conglomerate defibrillators were reportedly waiting in the wings to revive it?

Should your answer happen to be ‘yes’, then read on and see if any of this sounds vaguely familiar.

In an open email sent to The Guardian, new Liverpool owner John W Henry has admitted that he was not asked for a written guarantee from chairman Martin Broughton and former managing director Christian Purslow that he would not load NESV’s various takeover costs onto the club itself, as the executive pair deemed such a vow to be ‘not strictly legally enforceable’.

Instead, Henry and his 16 partners in NESV merely made assurances that they had no intentions of ‘burdening the club with their acquisition costs’.

Henry did, however, state that the majority of the debt that the previous regime had incurred has now been paid off as part of the takeover, with the only money the club now owes being the £37 million that is to be paid to lenders RBS for the cost of the development work for their proposed new stadium in Stanley Park:

“The simplest thing to say is that we removed all debt but the stadium debt. LFC [Liverpool Football Club] is not servicing debt other than stadium debt.”

Under the perfectly feasible guise of confidentiality, Henry also refused to disclose how NESV’s £300 million takeover was funded:

“I have certain obligations to my partners regarding confidentiality of a private company and in not disclosing our financials publicly.

LFC discloses its financials annually, so monies going in and going out are disclosed. But I’m not going to disclose NESV financials or financing information.”

Back in 2007, previous owners Hicks and Gillett made similar pledges in their offer document, stating that the interest payments on the £200 million they borrowed for the purchase of the club did not ‘to any significant extent’ depend on the future business of Liverpool – then duly set about servicing their hulking debts with money from the club’s revenue coffers, a move which (I think it’s fair to say) didn’t go down too well with the more fiscally aware contingent of the support.

Now, I’m fully aware that most, if not all, football clubs these days have notably viable operating debts and that a piffling £37 million can hardly be described as crippling when the relative outstandings of many of Liverpool’s Premier League contemporaries are taken into account.

However, NESV (who, lest we forget, could easily be construed as mere bargain vultures) have only been in place since last month, and it took considerably longer than just three or four weeks for rumblings concerning Hicks and Gillett’s finances (or lack thereof) to begin emanating from the bowels of the club – which could be a direct result of the heightened interest brought about by the unprecedented frenzy that surrounded all aspects of the takeover, but would still serve to worry me if I held any kind of vested interest in the short-term future of Liverpool.

Whereas they have been lauded as saviours by all and sundry, it remains a distinct possibility, given Henry’s guarded stance, that Broughton and Purslow will be made to pay for their gung-ho ‘anybody but Hicks and Gillett’ attitude in flogging Liverpool to the (second) highest bidder.