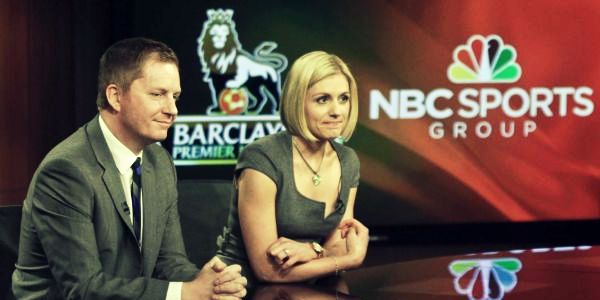 Premier League is becoming more and more involved in the USA and starting from August, the NBC Sports Group will be starting their coverage of all the 380 Premier League games in a season. The matches will also be streamed live on NBC Sports Live Extra.

The games not being aired on a designated NBC channel will be made available via Premier League Extra Time at no extra cost along with a package of overflow television channels. Which takes it over 600 hours of Premier League original programming.

The distribution of the games: 20 games on NBC, 154 on NBCSN, 22 on other NBCUniversal channels, 184 on Premier League Extra Time, 10 on Telemundo and 66 on Mun2. On the final day of the season, all the ten games being played will be shown on ten different TV channels.

The announcers for the matches have also been revealed. NBC’s MLS commentator Arlo White is named the lead play-by-play voice for the Premier League. Former England internationals Lee Dixon and Graeme Le Saux will work alongside White on Premier League matches on NBC as analysts.

Moreover, Gary Lineker – who played for teams like Barcelona, Everton and Tottenham – will serve as a special contributor for NBC’s coverage. He will host some on-site coverage throughout the season.

The studio host will be Rebecca Lowe, who is relocating to the US this summer. Lowe will host the Premier League coverage from NBC Sports Group’s International Broadcast Center in Connecticut, USA. Currently, Lowe is working with ESPN UK as a co-host in their Premier League matches as well as the FA Cup. She is the first woman in UK history to host the FA Cup final in 2012.

Preview of the 2013-14 Premier League season

High-profile celebrity supporters, comedians and journalists will explore what it is that’s so intensely loved – and loathed – about England’s top-flight league.

Series that follows athletes for the 36 hours leading up to a match.

30-minute program airing after the matches on Sunday with highlights of all the goals scored that weekend.

Modeled after the highly-regarded BBC show of the same name, a two-hour show with extended highlights on Saturdays and re-aired on Sunday mornings.

Same as above, but this will be a 90-minute show and will be aired on Sundays.

The best match of the weekend will be re-aired on Sunday nights on NBCSN in its entirety.

Weekly show produced by Premier League that recaps all the matches from the past week.